Jon Favreau Birthday Special: From The Replacements to Chef - Naming Best Roles of His Career So Far

As Jon Favreau gears up to celebrate his birthday this year with his family, we take the opportunity to start a marathon of his movies. And while we're at it, you guys can check out his best roles as an actor so far. 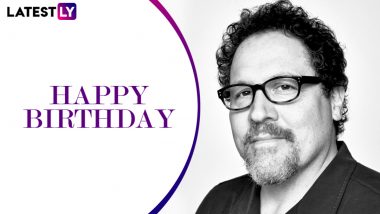 Jon Favreau, you beloved Happy Hogan from MCU celebrates his birthday today and we decided to name best roles of his acting career so far. While he's an accomplished director, delivering hits one after another, he's equally a talented actor. Besides being a supporting actor in Marvel movies, the actor has had many projects that have proved her mettle as a performer. He's an actor, director and also a producer and a screenwriter. It won't be wrong to tag him as the 'jack of all and master of all'. Armaan Malik Meets Jon Favreau at The Lion King’s World Premiere in Los Angeles.

As he gears up to celebrate his birthday this year with his family, we take the opportunity to start a marathon of his movies. And while we're at it, you guys can check out his best roles as an actor so far. The list curated by us is right below. The Lion King Remake: Ranking All the Main Characters in Jon Favreau’s Film, From Worst to Best.

Jon Favreau plays Carl Casper, a chef who loses his job at a popular restaurant. Post which he decides to revamp a food truck and start his own business. The movie was a heartwarming tale of relationships and how he ends up strengthening the bond with his family while trying to start afresh. The movie was also remade in Bollywood with the same name and starred Saif Ali Khan in the lead role.

Jon plays Happy Hogan in MCU and being an ardent MCU fan, we had to name this movie. He works for Tony Stark and pretends to be a rather cold person while secretly having a weak heart. While the character wasn't really crucial to the films' storyline, Jon made him look very endearing and he deserves credit for that.

A comedy starring Jon Favreau and Vince Vaugh! Favreau also marked his feature directorial debut with this movie. It revolved around two best friends who get embroiled into the world of organised crime.

Another Vince Vaughn starrer that had Jon play the role of Denver. As the name suggests, the movie is based during Christmas. The movie's lead couple plans a Fiji trip to celebrate their holidays but destiny has some different plans in store for them. After their plan goes south, they are forced to visit all four of their divorced parents for the holiday season.

Jon played Daniel Bateman, a tough guy who minds his own business and never listen to anybody. He's the kind of guy you want in your corner and his mere presence is enough to fill you in with confidence. While Keanu Reeves was the star of this movie, Jon was equally delightful.

(The above story first appeared on LatestLY on Oct 19, 2020 10:00 AM IST. For more news and updates on politics, world, sports, entertainment and lifestyle, log on to our website latestly.com).