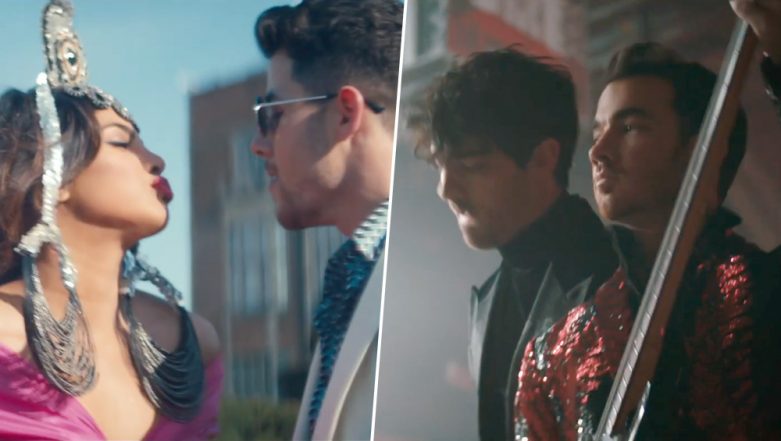 Jonas Brothers are back with Sucker (Photo Credits: YouTube)

And the Jonas brothers are back and how!! Joe Jonas, Nick Jonas and Kevin Jonas have collaborated once again for a music video after a long gap and they are here to KILL IT! The new music video titled 'Sucker' featuring the Jonas Brothers and their respective wives aka Sophie Turner, Priyanka Chopra Jonas and Danielle Jonas. The song is super cool, the beats are catchy and the visuals are so quirky that it will have you hooked! Right from the beginning till the very end, the new song by the Jonas brothers will make you go bonkers! Jonas Brothers Reunite: Comeback Song ‘Sucker’ Featuring Priyanka Chopra and Sophie Turner Is a Total Banger – Watch Music Video.

Check out some of the most hilarious and relatable Twitter reactions to the song here:

Haha, can't think of any!

They are killing it, and how!!

This was SO hot!

It was totally worth it

The wait was worth it omg!! Boy have I miss you guys @jonasbrothers #SuckerVideo

They are officially back

Speechless rn. I've been waiting for this and now, they're officially back—it makes my heart so happy. ❤ Love you and thank you for coming back! Congratulations on the #SuckerVideo #JonasBrothers @jonasbrothers @kevinjonas @nickjonas @joejonas pic.twitter.com/utMqcn4HyX

I just can’t get over how hot this family is!! #SuckerVideo pic.twitter.com/DlSawgXlRC

Have you guys watched the Sucker video by the Jonas Brothers yet? What's your take on it?

It was only yesterday when Joe Jonas tweeted a picture of him along with Kevin and Nick Jonas and it had 'Sucker' written on it. While we presumed that it was the announcement of the Jonas brothers coming back, we didn't expect the song to come out so soon. In any case, we're more than happy and Sucker is definitely going to be on the top of our playlist for this weekend! How about you?