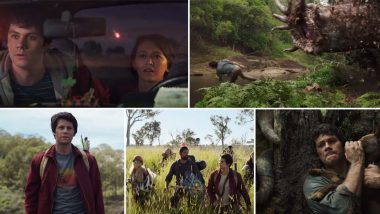 A few weeks back that Dylan O’Brien's next film, Love and Monsters is heading straight to video on demand, skipping the theatrical release amid coronavirus outbreak. Movies like Tenet and No Time To Die might draw in the audience during the pandemic, but chances might be sleek for Love and Monsters, so it seems like a wise decision by Paramount. The studio released the first fun-filled trailer of the movie. Jessica Henwick, Michael Rooker, Ariana Greenblatt also star in the film. And, as the titles suggest, the trailer also features a hell lot of monsters. Come Play Trailer: You'd Pick to Be Lonely Over This Horror Film's Monster 'Friend' (Watch Video).

In the world Love and Monsters, the globe has been ravaged by monsters and a handful of humans are forced underground. Our hero finds out that the love of his life his stuck 86 miles away from him and he sets out to find her. His instincts suck, so he is almost never able to see the monsters sneaking upon him. Thank God, he makes three friends on the way including a dog. Lovecraft Country Review: Racism Is Scarier Than Man-Eating Monsters in This Gripping Horror-Fantasy Series.

Check Out The Trailer For Love and Monsters Here:

The best thing about Love and Monsters seems to be that the monsters are visible. Even in broad daylight. You don't have to squint your eyes to find them, or turn your screen's brightness up to match the surface of the sun to see the monsters properly.

Love and Monsters is directed by Michael Matthews. It's produced by Real Steel director Shawn Levy. The movie will be Dylan's first big-screen appearance after Maze Runner: The Death Cure. Though, he did voice star in Bumblebee.

(The above story first appeared on LatestLY on Sep 15, 2020 10:19 PM IST. For more news and updates on politics, world, sports, entertainment and lifestyle, log on to our website latestly.com).