There are some terrifying scenes in Come Play trailer. In one such scene, the kid is playing with funny face filters on his tab. The tech picks up a face behind him, while there is no one there in plain sight. 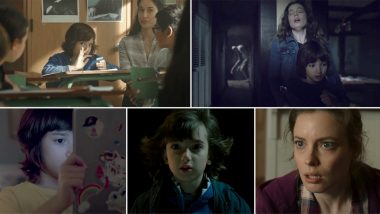 The first trailer of the upcoming horror film, Come Play, has hit the web. For the initial moments, the trailer gives off a generic vibe - a lonely, aloof kid is haunted by an entity, that's ignored by the parents. But as the footage progresses, we witness the fresh execution that the story has received from the makers. The entity is visible through the lenses of camera phones, tablets etc. It doesn't seem like a ghost story where we don't even see the apparition for the major chunk of the film. Here, the thing makes an appearance a number of times in the trailer itself. Michael Pena Remembers Watching Horror Classics with Mom, Says ‘They Were like a Roller Coaster Ride’.

There are some terrifying scenes in Come Play trailer. In one such scene, the kid is playing with funny face filters on his tab. The tech picks up a face behind him, while there is no one there in plain sight. Lovecraft Country Review: Racism Is Scarier Than Man-Eating Monsters in This Gripping Horror-Fantasy Series.

The official synopsis of the film reads:

“Come Play stars Azhy Robertson as a lonely young boy who feels different from everyone else. Desperate for a friend, he seeks solace and refuge in his ever-present cell phone and tablet. When a mysterious creature uses the boy’s devices against him to break into our world, his parents must fight to save their son from the monster beyond the screen.”

Come Play's monster is looking for a friend. Once it targets someone that person would never feel alone. Well, you'd totally pick your last-minute-ditcher friends over this terrifying monster any given day.

Come Play, directed by Jacob Chase, and adapted from the short film, Larry, will release on Halloween 2020. Again, we will see about that given the fact that pandemic continues to haunt the world. Come Play is the first time Chase has directed a full-length feature.

(The above story first appeared on LatestLY on Aug 27, 2020 09:03 PM IST. For more news and updates on politics, world, sports, entertainment and lifestyle, log on to our website latestly.com).