Priyanka Chopra and Nick Jonas Stroll on NYC Streets With Their Pet Dog Diana and The Pics Are Adorable! 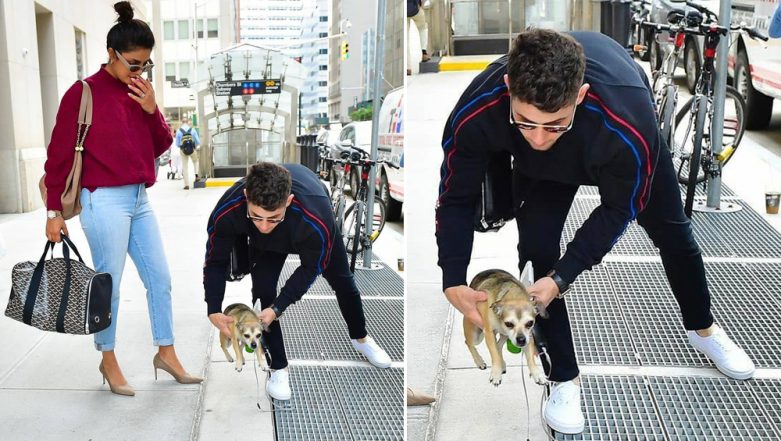 Priyanka Chopra and Nick Jonas are setting not marriage goals with their every casual outing. Their mushy pics with each other (or without) always make way to the social media and the fans are always hungry for more. The recent bunch of pictures has NikYanka and their pet pooch, Diana. The dog tagged along with this stylish couple and the pictures are a treat to every animal lover! The Sky Is Pink Trailer: Priyanka Chopra, Farhan Akhtar and Zaira Wasim's Poignant Family Drama Looks Unmissable (Watch Video).

PeeCee looked pretty in a maroon sweatshirt paired with ankle-length faded blue jeans, paired with beige heels. She styled her hair in a simple top bun and looked cool in funky sunglasses. Oh, yes she also proudly flaunted her diamond engagement ring and her customized Dior bag as well. On the other hand, Nick too wore a cute all-black black sweatshirt combo and looked dapper as usual. And then, of course, there was that cute doggo with them! Check out the pics below.

This is adorable 🥺😍 @priyankachopra @nickjonas @diariesofdiana

Make Way For The Stylish Couple

PC recently opened up about that moment when Nick Jonas was missing her at the VMAs while his brothers were with their respective wives. She revealed that she was unwell and hence could not be with him. She was quoted saying, "So, this was supposed to be that fun thing. We had dinner planned after, and then I was really unwell. I think Nick felt really bad that he was there and I was unwell," Priyanka added. "I was watching it from my couch at home and when they won, just seeing his face I felt like, 'Ugh'. I should have been there, but I was so sick, and I saw it on his face." How did you like the pictures of Nick, Priyanka and Diana?

Comments
Tags:
Diaries of Diana Nick Jonas Priyanka Chopra The Sky Is Pink
Comments
You might also like