Ray Fisher's support for the Jack Snyder cut may cost him his Cyborg role. 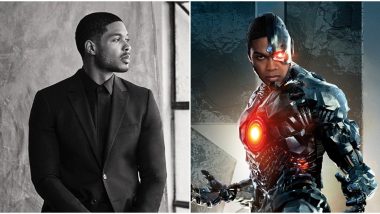 Ray Fisher may lose out on his DC character, Cyborg and there are chances that Warner Bros are already in talks to replace him. While the character's debut outing in DCEU was made through Justice League - an ambitious project that failed to bag any good critical reviews or even impress the audiences, there were no reports of his second outing or a solo movie. While his contemporaries like Aquaman and Wonder Woman have their sequels releasing in the coming years and Flash movie is already in works, there was no major announcement for Cyborg until recently. Crisis On Infinite Earths Finale: Netizens Go Berserk to See Flash vs Flash Face-Off As Justice League’s Ezra Miller Meets Arrowverse’s, Grant Gustin.

As per a report in We Got This Covered, Warner Bros has plans for Cyborg character and he's a part of Blue Beetle (BB) film's screenplay. The production house is going ahead with their BB movie and Cyborg will essentially be a part of it but Ray Fisher may not return. Apparently, WB is super pissed with the actor being vocal about his support for Jack Snyder and 'Release the Snyder Cut Movement'. They are furious over the way he has remained loyal to the director and are thinking about replacing him with another name. #ReleaseTheSnyderCut: After Gal Gadot, Ben Affleck and Jason Momoa's Posts, DC Fanboys' Demand for Zack Snyder’s ‘Justice League’ From Warner Bros Just Got Stronger.

However, nothing's official yet and things could take a different turn in future. The production house is finally getting on the right track with their DCEU releases and there's no way they would want to hamper or ruin their progress. The character definitely has more scope to shine in the universe and hopefully, we'll get to see more of him.

(The above story first appeared on LatestLY on Mar 19, 2020 08:43 PM IST. For more news and updates on politics, world, sports, entertainment and lifestyle, log on to our website latestly.com).