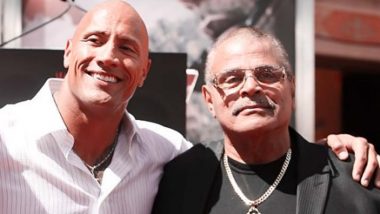 Former professional wrestler, Rocky Johnson and father to Dwayne 'The Rock' Johnson breathed his last on Wednesday (January 15). He died at the age of 75. The reason behind Rocky Johnson's sudden demise is not yet disclosed. However, the announcement with regards to his death was out in a statement by World Wrestling Entertainment (WWE). "WWE is saddened to learn that Rocky 'Soul Man' Johnson (born Wayde Douglas Bowles), a WWE Hall of Famer, former World Tag Team Champion, and father of Dwayne 'The Rock' Johnson, has passed away at age 75," the statement read. 'The Rock' Dwayne Johnson Retires From WWE: Relive Five Best Matches of The Wrestling Legend From The Ring (Watch Videos).

Reportedly, Rocky's manager had also confirmed the sad piece of news to NBC News. According to the wrestling league's statement, Rocky Johnson initially started his career in the 1960s with the National Wrestling Alliance and it was later when he rose to fame as a wrestler with WWE (1983). For the unversed, Rocky's son, Dwayne had made his father part of the WWE Hall of Fame in 2008. Dwayne ‘The Rock’ Johnson’s Workout, Fitness and Diet Plan: How the Former WWE Wrestler Keeps in Shape (Watch Videos).

Here, Check Out A Father-Son Moment Below:

Happy Father’s Day to this hardly ever smiling OG bad ass. Little boys by nature, look up to and idolize their old man. They want to be just like em, do whatever they do and are always looking for their approval. Funny thing is the day I stopped looking for that approval was the day I understood what it meant to be man and more importantly, a father. That shift lifted me to a new level of gratitude for the tough love he always gave. Years later as a man and father of three girls, I know that tough love, is a helluva lot better than no love at all. I’ll take it. It’s made me who I am today. Grateful to the original Rock. #HappyFathersDay #KingStache #RockyJohnson

After his goodbye to the wrestling arena, Johnson mostly worked with his son Dwayne. Also until now, Dwayne has not yet made any social post offering condolences to his father. More strength to the Johnson family. RIP, Rocky Johnson. Stay tuned for more updates on the same!

(The above story first appeared on LatestLY on Jan 16, 2020 08:44 AM IST. For more news and updates on politics, world, sports, entertainment and lifestyle, log on to our website latestly.com).