Spider-Man No Way Home: New Promo Art and Merchandise Leaks Give Us a Hint Towards the Film’s Plot

Spider-Man: No Way Home will dive deep into the concept of Peter having an identity crisis. The promo art and merchandise drops confirm that Peter will be using magic in some capacity as one of the photos feature him shooting his webs with magic surrounding it. 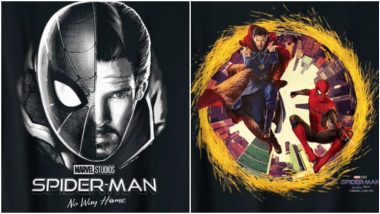 Another day, another Spider-Man: No Way Home leak. The wall crawlers' third film has had everything come out, but a trailer and a poster. This new merchandise drop gives us a hint towards what we can expect from the plot and hints towards a larger presence of Doctor Strange in the story. From listings on Amazon, you can see a bunch of promo art and clothing with a new look towards the 2 new suits that will be featured. A Reddit post detailing all of the merchandise was put up on the subreddit r/marvelstudiosspoilers. You can check the post by clicking here.  Spider-Man No Way Home: New Merchandise ‘Leaks’ Tease Spidey Costumes and Major Fight Scene in Tom Holland’s Upcoming Marvel Movie.

With these it looks like Spider-Man: No Way Home will dive deep into the concept of Peter having an identity crisis. It also confirms that Peter will be using magic in some capacity as one of the photos features him shooting his webs with magic surrounding it.

It looks like there will be some cult formed around Mysterio as well. Given how Far From Home ended, it’s not a reach to consider that people will be worshipping Mysterio in some capacity given how he was touted as a hero by J Jonah Jameson. Spider-Man - No Way Home: Plot of Tom Holland's Marvel Film Leaked? An Old Reddit Thread Claiming So in Going Viral!

Along with Mysterio having a cult, it looks like Peter himself will be getting a following as well. It makes things interesting and a bit realistic as it gives two sides of a coin impression to the plot. Doctor Strange is also heavily featured in the promo art hinting that he might have a larger part in the film. Many have speculated that he will be providing Peter shelter after his identity got exposed and will help realise the rumoured multiverse aspect.

Although with this merchandise and promo art drop, we get no hints towards the multiverse. It looks like Sony and Marvel will be keeping the cards close to their chest in order to bank on a massive reveal in the movie. Hopefully, we get a trailer soon so that the fans can rest easy knowing that the movie actually exists rather than being a pipe dream. Spider-Man: No Way Home is scheduled to release on December 17, 2021.

(The above story first appeared on LatestLY on Aug 09, 2021 08:16 PM IST. For more news and updates on politics, world, sports, entertainment and lifestyle, log on to our website latestly.com).