The Falcon and The Winter Soldier Trailer Shows Anthony Mackie and Sebastian Stan Indulging in Bromance, But We Wonder Where Is Captain America's Shield? (Watch Video)

The Falcon and The Winter Soldier trailer sees Anthony Mackie as Sam Wilson and Sebastian Stan as Bucky Barnes aka The Winter Soldier go on adventures to save the earth from Baron Zemo and his evil plots. But where is Captain America's Shield? Well, you have to wait till March 2021 for answers. 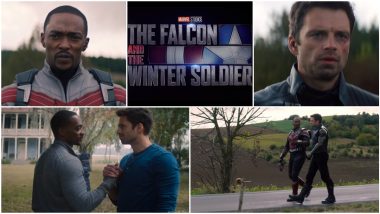 December 11 saw Marvel Studios release trailers of their much awaited Disney+ series', Wanda Vision, Loki and The Falcon and The Winter Soldier. While The Falcon and the Winter Soldier is the studio's new show and was originally scheduled to be their first original release, time delays and shooting reschedules led to the series being pushed back. It will now release in March 2021. Captain Marvel 2, Thor: Love and Thunder, Ironheart, Fantastic Four, I Am Groot – Marvel Studios Announces The Movies And TV Series Releases For Phase Four And Five.

The trailer sees Anthony Mackie as Sam Wilson reminisce how the legacy of Captain America aka Steve Rogers' shield is "complicated." And while this one sentence has our ears up, the trailer sees him and Sebastian Stan as Bucky Barnes aka The Winter Soldier go on adventures to save the earth from Baron Zemo and his evil plots. However, the question that nags us here is , "WHERE IS CAPTAIN AMERICA'S SHIELD?" Loki Trailer: Tom Hiddleston Is Back As the Charming and Notorious Bad Guy, Here's What He Was Upto When He Disappeared In Endgame (Watch Video).

The 6-episode series' story follows what happened after Avengers: Endgame. If you recall, Captain America, choosing to live a simple life, hands over the shield to Sam Wilson. Wilson and Barnes reunite in this venture and their bromance is hard to miss. And while March is just a few months away, we all will be scratching our brains off on where is Cap's shield? You got any theories?

(The above story first appeared on LatestLY on Dec 11, 2020 01:07 PM IST. For more news and updates on politics, world, sports, entertainment and lifestyle, log on to our website latestly.com).