Loki Trailer: Tom Hiddleston Is Back As the Charming and Notorious Bad Guy, Here's What He Was Upto When He Disappeared In Endgame (Watch Video)

The new Loki trailer will provide us all with answers to many questions. From where did Loki disappear to with the Tessaract in Avengers: Endgame, to what happened with him, from hinting that he will be meeting his brother Thor soon, to getting sucked back to Asgard by the bi-frost, and also catching a glimpse of the Black Widow, we'll see it all in Loki. 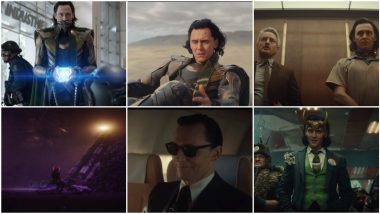 Tom Hiddleston is back as Loki and we all can't keep calm. With Disney+ Plus releasing trailers for their upcoming Marvel movies, the makers will be seen exploring alternate storylines of characters. And we'll see where Loki disappeared to and what happened to him when he escaped with the Tesseract from Stark Industries in Avengers: Endgame. What also intrigued us was the hint from Loki of how he will be meeting his brother soon and also how the bi-frost sucks Loki back into Asgard. Yes that happens. Oh... and do we see a glimpse of Natasha aka the Black Widow too? Tom Hiddleston Birthday: 3 Best Moments As Loki From The Marvel Cinematic Universe (Watch Videos).

The new Loki trailer sees the God of Mischief disappear and appear to land in an unknown land. And just when his mind starts making p plans, he is captured and taken to TVA, something that we know nothing about and are curious AF to know. From thereon, begins Loki's mischief. Loki: Tom Hiddleston Starrer Disney Plus Series to Introduce MCU's First Transgender Character.

Loki was killed in Avengers: Infinity War, but the group's decision to travel back in time brought Loki back and also gave him the possession of the Tesseract, aka the Space Stone. The cast of Loki includes Owen Wilson, Sasha Lane, Sophia Di Martino. Containing 6 episodes, Loki is set to premiere on Disney+ in May.

(The above story first appeared on LatestLY on Dec 11, 2020 12:03 PM IST. For more news and updates on politics, world, sports, entertainment and lifestyle, log on to our website latestly.com).