Tom Holland Calls MCU’s Spider-Man 3 the ‘Most Ambitious Standalone Superhero Film of All Time’ and We Are Now Both Scared and Excited!

Spider-Man 3, aiming for a December 17, 2021 release, also brings back Zendaya, Jacob Batalon, Marisa Tomei, and Tony Revolori from the earlier films. Apart from these, Alfred Molina is reprising his role of Doc Ock from Sam Raimi's Spider-Man 2, and Jamie Foxx is returning as Electro from The Amazing Spider-Man 2. 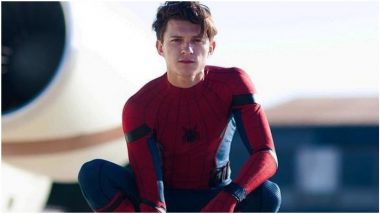 Tom Holland is already in the middle of shooting Spider-Man 3, the third entry of Marvel Cinematic Universe's solo Spidey franchise, and it is definitely one of the most exciting superhero movies we are waiting to see. Every day, we are hearing newer and newer rumours about the sequel to Spider-Man: Far From Home sequel, that range from more Avenger cameos to multiple dimensions. However, the makers are hush-hush about the Jon Watts directorial, and its usually flippant lead star is also very cautious about revealing deets about the film. Though he is dropping some very exciting aspersions about how Spider-Man 3 is turning out to be. Tom Holland Confirms An 'Absolutely Insane' Spider-Man 3 Starts Shooting This July.

Like his recent interview to Variety, where Tom Holland was talking about his upcoming film Cherry, that is directed by the Russo bros (who also directed him in Captain America: Civil War, Avengers: Infinity War and Endgame). While the actor revealed some juicy details about his role in Cherry and his desire to turn a director, Marvel fans would be most interested to hear what he has to say about Spider-Man 3.

Watch the Trailer of Cherry:

While he first refrained to divulge anything big about the movie, Holland, on a little prodding, calls Spider-Man 3 the 'most ambitious standalone superhero film of all time'.

He said, "I can say that it’s the most ambitious standalone superhero movie ever made. You sit down, read the script, and see what they’re trying to do, and they’re succeeding. It’s really impressive. I’ve never seen a standalone superhero movie quite like it. And I’m just, you know, again, that lucky little shit who happens to be Spider-Man in it." Spider-Man: Far From Home Movie Review: Tom Holland and Jake Gyllenhaal Team Up to Deliver a Thrilling, Surprise-Filled Superhero Rumble.

Now that is a very bold claim, and we are very eager to see how Watts is taking Peter Parker to higher levels of brilliance. That said, we are also a little scared, for the last couple of times, a Spider-Man film went ambitious, we got emo Spider-Man and a Sinister Six promise that went nowhere!

Tom Holland also gave an update on how Spider-Man 3 shoot has progressed till now. He added, "We got a lot more shooting to do. We started before Christmas and shot for like seven weeks. We stopped for the Christmas break, and then we’re starting again. I’m just as excited as everyone else to see it, let alone be a part of it."

Spider-Man 3, aiming for a  December 17, 2021 release, also brings back Zendaya, Jacob Batalon, Marisa Tomei, and Tony Revolori from the earlier films. Apart from these, Alfred Molina is reprising his role of Doc Ock from Sam Raimi's Spider-Man 2, and Jamie Foxx is returning as Electro from The Amazing Spider-Man 2. Benedict Cumberbatch would also be turning in as Doctor Strange. While the casting isn't confirmed yet, JK Simmons might also appear as J Jonah Jameson, an appearance teased in the mid-credit sequence of Spider-Man: Far From Home. JK Simmons Birthday Special: His 10 Best Spider-Man Moments As J Jonah Jameson That Make Us Yearn To See Him in the Upcoming Marvel Film!

Apart from these actors, there are rumours that Tobey Maguire and Andrew Garfield might return with their iterations of the web-crawler. Another exciting rumour is that Charlie Cox's Matt Murdock aka Daredevil would have a role in the movie. All in all, excitement galore!

(The above story first appeared on LatestLY on Feb 05, 2021 02:41 AM IST. For more news and updates on politics, world, sports, entertainment and lifestyle, log on to our website latestly.com).