We Can Be Heroes First Look Out! Priyanka Chopra Looks Fierce as a Baddie, Pedro Pascal Looks Convincing as the Superhero; Movie to Air From January 1, 2021 on Netflix

Priyanka Chopra's 'We Can Be Heroes' by Robert Rodriguez is finally making headlines for its first look and we couldn't be more excited. 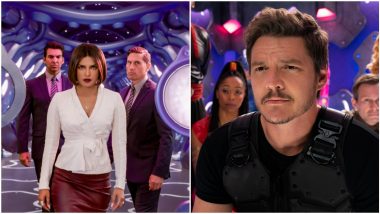 Priyanka Chopra and Pedro Pascal in We Can Be Heroes (Photo Credits: Instagram)

Priyanka Chopra's much-discussed project finally has an update. 'We Can Be Heroes' by Robert Rodriguez is finally making headlines for its first look and we couldn't be more excited. The movie that's essentially a superhero saga also stars Pedro Pascal and Christian Slater in lead roles. We know PeeCee's playing a baddie yet another time while her aforementioned co-stars are superheroes who'll lock horns with her. A lot was being said and discussed about Priyanka's next venture and we are excited to see her first look from the same. She looks bold, fierce and confident enough to take on superheroes. Priyanka Chopra is Eager to Play a Superhero On-Screen, Says 'Someone Just Give me Superpower' (Watch Video).

Besides PeeCee's first look, we also had an opportunity to check out Pedro Pascal and Christian Slater's first looks as superheroes. Oh, and yes the kids! They are the real heroes of this movie and it is set in the same universe as Sharkboy and Lavagirl. The film will be a stand-alone sequel to The Adventures of Sharkboy and Lavagirl and is slated to hit Netflix on January 1, 2021. Yup, that's the New Year gift you can expect from Priyanka and the entire team of We Can Be Superheroes. Priyanka Chopra Wants To Do More Action Movies.

Check Out their First Looks

The film, set in the same universe as 'Sharkboy and Lavagirl,' hits Netflix on Jan. 1, 2021

(The above story first appeared on LatestLY on Nov 12, 2020 10:31 PM IST. For more news and updates on politics, world, sports, entertainment and lifestyle, log on to our website latestly.com).