Priyanka Chopra is Eager to Play a Superhero On-Screen, Says 'Someone Just Give me Superpower' (Watch Video)

Priyanka Chopra is desperate to join the league of superheroes in Hollywood. The actress insists that she can play anything and anyone on the big screen and filmmakers should just give her a superhero character. Well, we hope Marvel and DC people are reading this. 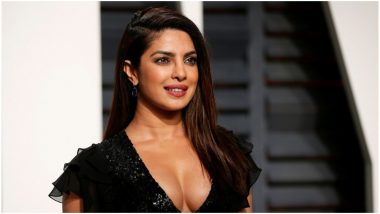 No, Priyanka Chopra is not playing a superhero in Netflix's We Can Be Heroes and we are as disappointed as all her fans. While we read reports of PeeCee being considered for Marvel's Kamala Khan, a female superhero of Pakistan origin, no further development around the same was made yet. Meanwhile, Priyanka's collaboration with Robert Rodriguez for this superhero venture for an OTT platform sounded promising. However, turns out we might have to wait a bit longer as the actress is still waiting for someone to offer her a superhero character.

Priyanka in her recent conversation with MTV News at Tiff 2019 revealed that she's eager to play a superhero and someone should offer her a role. "I just want superpowers man! I don't care what character it is, someone just give me superpowers. I'll be good at anything. I'll try, I'll work, I'll learn," she said in her same chat. Well Marvel or DC folks, just in case you are reading this, you know whom to contact for your next superhero outing. Ms Marvel: All You Need to Know About Kamala Khan, the New Superhero Set to Make Her Debut on Disney Plus.

You can watch the interview here

Meanwhile, the actress was quick to reveal that she plays a baddie in We Can Be Heroes. It's a kids superhero movies and she plays their nemesis. Though the project has a superhero aspect, it's not related to her in any way. Still sounds promising, eh? We can't wait to watch it on the small screen and PeeCee has started shooting for it already.

(The above story first appeared on LatestLY on Sep 11, 2019 05:59 PM IST. For more news and updates on politics, world, sports, entertainment and lifestyle, log on to our website latestly.com).