World Dracula Day 2020: 5 Amazing Films Featuring the Gothic Character That Are a Must-Watch

When it comes to films, not many have managed to capture the perfect essence of the gothic character and haven't been exact adaptations of Stoker's book. 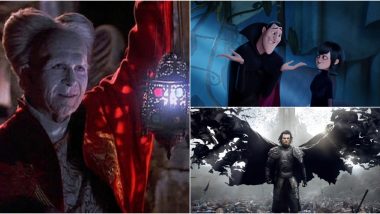 May 26 is celebrated as World Dracula Day which commemorates the publication of Bram Stoker's Dracula on May 26, 1897. Dracula has inspired tens of films and stories the world over and we bet you have seen several films featuring the character. Christopher Lee to Luke Evans, many actors have played this character. When it comes to films, not many have managed to capture the perfect essence of the gothic character and haven't been exact adaptations of Stoker's book. Priyanka Chopra Sparks Off Halloween Feels in a Dracula Moschino Shirt Dress! Fang-Tastic, We Say!

There have been different ways in which the character of Dracula as been interpreted in films including an excellently, fresh take done by the animated film Hotel Transylvania in which Dracula's voice has been performed by Adam Sandler. On World Dracula day, here's looking at films featuring this character.

This film was filled with a lot of detail when it comes to capturing the novel. It starred Gary Oldman in lead, who won a lot of praises for his act. The film also featured Keanu Reeves, Winona Ryder and Monica Bellucci.

This Dracula classic is considered to be a visually stunning masterpiece. The film was loved by audiences for its production design and other elements.

This is considered to be one of the best films featuring the character of Dracula with a brilliant act by Sir Christopher Lee who made this character look not only deadly but also brought a sense of regality to it.

An origins story, while the film starring Luke Evans in lead didn't receive much of a positive response from critics, the film did make an amazing effort. It highlighted the story of Vlad the impaler, a Transylvanian prince who turns himself into a vampire to protect his family.

This animated drama is loved by everyone for its light take on Dracula. Reimagining the gothic character, the film showed him as an owner of a high-end resort for monsters.

We hope you enjoy watching these films if you too love this gothic character. Have any other favourites? Do tell us in comments below.

(The above story first appeared on LatestLY on May 26, 2020 09:10 AM IST. For more news and updates on politics, world, sports, entertainment and lifestyle, log on to our website latestly.com).