Allu Arjun’s Ala Vaikunthapurramuloo to be Remade in Hindi and Kartik Aaryan Roped in to Play the Lead Role?

Ala Vaikunthapurramuloo was the Sankranthi special release of this year, starring Allu Arjun and Pooja Hegde in the lead. It was the first film of Allu Arjun to hit the screens this year, and it turned out to be a mass entertainer. 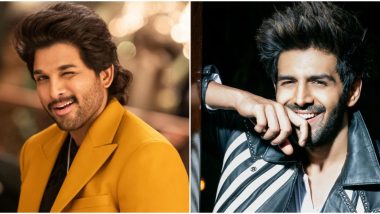 Kartik Aaryan stepping into the shoes of Allu Arjun? Whoa! If the reports are to be believed, then it is indeed a big boom for Kartik. A source revealed to Pinkvilla that this Hindi version would be helmed by Rohit Dhawan. Regarding Ala Vaikunthapurramuloo been remade in Hindi, the source was quoted as saying, “Allu Arjun and S Radha Krishna are now teaming up one more time to produce Ala Vaikunthapurramuloo in Hindi. The script is in place and they have even got a director on board to helm the project. Rohit Dhawan, who earlier directed Desi Boyz and Dishoom will be captaining this one. The makers wanted to make it with a young Gen-Y star who has a good audience base.” Ayushmann Khurrana or Kartik Aaryan - Who Pulled Off The Professor Look From Money Heist Better? Vote Now!

Watch The Trailer Of Ala Vaikunthapurramuloo Below:

About bringing Kartik Aaryan onboard for this project, the source further mentioned, “Kartik has been narrated the full Hindi version of the script over a video call recently in the presence of Allu and Radha Krishna. He had loved the original and from what we hear, he has already given his nod to the Hindi remake as well. The team is currently figuring out his dates and will lock the schedule once everything is back to normal.” Now we got to wait for the official announcement. If Kartik would be playing the lead hero, we wonder which actress would be paired opposite him. Do you have any suggestions?

(The above story first appeared on LatestLY on Apr 17, 2020 11:15 AM IST. For more news and updates on politics, world, sports, entertainment and lifestyle, log on to our website latestly.com).