Amitabh Bachchan's Tamil debut Uyarntha Manithan Shelved After Differences Started Brewing Between Him and the Producer?

SJ Suryah will try and sort out the differences between Amitabh Bachchan and Uyarntha Manithan producer. 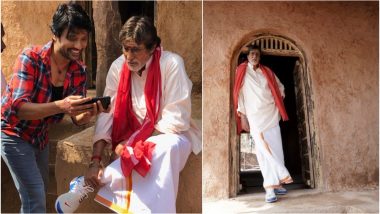 Amitabh Bachchan was excited to foray into Tamil Cinema with Uyarntha Manithan. He had even started shooting for it and few pictures of his first look went viral on the internet. However, seems like the project is on the verge of getting shelved. Reason? Apparently, differences were brewing between Big B and producer Suresh Kannaan and they didn't really get along very well. The duo even had a fallout after which the shooting was stalled and hasn't resumed till date. However, the Baghban actor's co-star SJ Suryah has now issued a statement stating that he'll make things work between them. Amitabh Bachchan Surprises Fans by Tweeting in Tamil, Shares Two Pictures From the Sets of Uyarntha Manithan!

In his statement, he wrote, "There is a small issue between the production company and Big B Saab. I will sort it out and take it forward. After my film Monster's release (May 17), I will fly to Mumbai to sort out these issues. Myself and director Tamilvaanan have already sorted out many issues to take the film to this stage. We got the great tweet on the third day of shoot from Big B Saab out of love and respect for our work. Ignore negativity."Amitabh Bachchan, Ramya Krishnan Reunite After Two Decades in 'Uyarntha Manithan'.

Check out Suryah's statement below

Amitabh had given 35 days for the shooting of Uyarntha Manithan. While the producers demanded 40, Big B was unavailable to allot more than 35 days. With so many commercials and shooting of KBC, he requested the makers if they could wrap it in less number of days and they agreed. We wonder if the same issue was a reason behind their differences. Also if the veteran star will listen to Suryah's plea and resume his shooting once again.

(The above story first appeared on LatestLY on May 15, 2019 08:23 PM IST. For more news and updates on politics, world, sports, entertainment and lifestyle, log on to our website latestly.com).