Women have legs. In 2020, women have to normalise it. 18-year-old, Anaswara Rajan, an actress active in the Malayalam film industry, was trolled and abused online for posting a picture in shorts. A day after, like the female superheroine gang up in Avengers Endgame, Rajan has found support from a legion of several actresses. 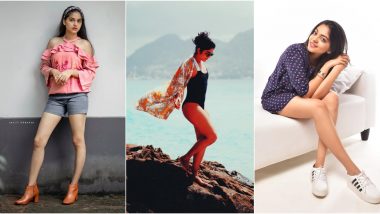 Women have legs. In 2020, women have to normalise it. 18-year-old, Anaswara Rajan, an actress active in the Malayalam film industry, was trolled and abused online for posting a picture in shorts. A day after, like the female superheroine gang up in Avengers Endgame, Rajan has found support from a legion of several actresses. Popular names like Rima Kallingal, Parvathy, Nazriya, Ahaana Krishna and Apoorva Bose have put up pictures showing off their legs as a sign of protest against the unsolicited moral policing. Adil Ibrahim, Divya Prabha and singer-musician Faisal Razi are others who spoke up in Rajan's support. Pakistan Slut Shames Mahira Khan For Wearing a See Through Tee; Humsafar Star Gets Love From India For Her Work With Afghan Refugees!

Responding to haters, Anaswara captioned one of her pictures: "Don't worry about what I'm doing . Worry about why you're worried about what I'm doing." Ahaana Krishna also had strong words to say on the matter. "Pick up this flamboyant display of patriarchy and discard it in the first dust-bin you can find around you," she wrote. Aisha Sharma Slut-Shamed For Wearing Racy Backless Jumpsuit, Actress Hits Back by Sharing Screenshots and a Powerful Message (See Pics).

Check Out The Picture That Started It All:

Rajan was undeterred by the backlash. She responded by posting another set of pics in the same outfit.

Here's How Rima Supported Her

Posting a really nice picture of me wearing a tiny dress , showing most of my legs to take attendance of the number of creeps who will line up in attention in my comment box to post third-rate comments :) 2 things. Firstly , what I wear isn't your business. What anybody wears isn't your business. Your business is just your business. Probably you don't have enough of it , so you try and poke your nose into other people's business. I will wear Shorts , Sari , Shirt or a Swim-suit .. it's not your license to question my character. Neither is it my oppurtunity to prove my own character. So , WATCH YOUR THOUGHTS , NOT MY CLOTHES 🤷 Secondly , as far as I know .. legs , stomach , hands etc .. they are all the same, be it in the body of a man or a woman. I can't see any difference that is so important that it justifies the difference between the kind of comments that make it to the comment box of a man in little clothes and that of a girl. If a man shows his well toned body , it's Inspiring , Mass and Frickin' Hot. When a girl does the same , she looks like she's ready for Sex? She's Shameless? She’s an Attention Seeker? She's trying to turn people on for work? Pick up this flamboyant display of patriarchy and discard it in the first dust-bin you can find around you. Me posting a picture in a super short dress has only 1 meaning - I like that picture and I felt like sharing it on my own social media profile. Any other meaning that you derive out of it is nothing but a reflection of the unfortunate situation of your life and the things you lack in it. Gross mindsets might not change way too much. But the license to publicly speak out one's gross mindset can be shut down. Call out slut-shamers. Call out dirty patriarchy. And stop giving a damn about what a random person has to comment on your clothes. Do these 3 things and slowly but surely , creeps who want to say creepy things will be so scared to spit out the poison that they will learn to keep it within themselves. I'd like to sum up this slightly long post with a quote I read recently on Social Media - " Oh my favourite season will be the Fall of Patriarchy 🍁 " Image shot by @rexphotography.in 💫

The online movement is growing big. More and more celebs and common folks are  sharing pictures to shut down the moral policing. This was not the first time when an actress has been slut shamed for wearing clothes that seemed inappropriate to small brained individuals. We hope this is the last.

(The above story first appeared on LatestLY on Sep 16, 2020 08:20 PM IST. For more news and updates on politics, world, sports, entertainment and lifestyle, log on to our website latestly.com).