Annabelle Sethupathi Review: Vijay Sethupathi and Taapsee Pannu’s Horror-Comedy Is ‘Lukewarm’ and ‘Nonsensical’ As Per Critics

Director Deepak Sundarrajan's Annabelle Sethupathi starring Taapsee Pannu and Vijay Sethupathi is a fantasy horror comedy. The movie as per the critics is boring and blah. an 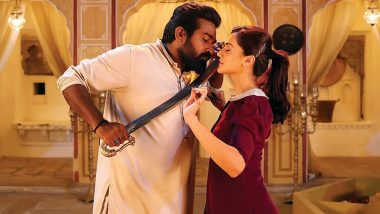 Annabelle Sethupathi released on Disney+ Hotstar on September 17.  Helmed by Deepak Sundarrajan, the movie stars Vijay Sethupathi and Taapsee Pannu as the lead. The story of the movie is fictional and revolves around the reincarnation of Taapsee, who enters the palace that was built for her by a king (Vijay Sethupathi). Further, what happens becomes the crux of the tale. So, has the movie impressed the critics or not? Well, the reviews are out and it's not in the horror-comedy's favour. Here, read on. Annabelle Sethupathi: Vijay Sethupathi and Taapsee Pannu’s Pictures Go Viral Ahead of the Film’s First Look Reveal!

News18: "The one baffling question that remains unanswered at the end of the 2:14 hour run, was why would actors of Vijay Sethupathi and Taapsee Pannu’s caliber, choose to star in a film as inane as this? The emotions invoked in the romantic scenes between them, mostly owing to Vijay’s restrained performance, is completely nullified by meaningless chase sequences and slapstick humour in most parts."

The Hindu: "Taapsee, too, fails to impress in these portions. Vennela Kishore makes a cameo, but his dubbed lines and exaggerated histrionics seem out of the place. The uncomic portions, thanks mainly to Vijay’s performance, kind of work. But then, that’s not a good thing to say about a comedy, is it?"

TOI: "Things get somewhat better in the second half, with Vijay Sethupathi and Taapsee making a broadly written romance work. Plus, the actors are in good form. Radikaa Sarathkumar gets to channel Yogi Babu in a scene and it is fun to see the veteran act in a comic role. While he has been funnier in many films, Yogi Babu manages to make us chuckle a few times with his one-liners and anchors the motley bunch of supporting actors."

The movie is titled Annabelle Rathore in Hindi. Also, going by the above reviews, we feel that the film is not a great watch, but is moreover like one time watch. Stay tuned!

(The above story first appeared on LatestLY on Sep 17, 2021 03:21 PM IST. For more news and updates on politics, world, sports, entertainment and lifestyle, log on to our website latestly.com).