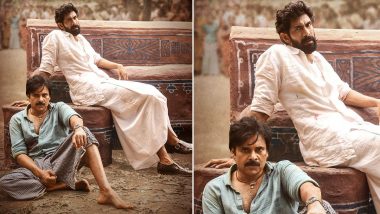 Pawan Kalyan and Rana Daggubati's action drama 'Bheemla Nayak' is gearing up for its Hindi release soon. Reports say the dubbed Hindi version of 'Bheemla Nayak' will be released on March 4. Despite there being no official update from the team, it is reported that the producers are trying their best to accommodate the Hindi release of the movie. Bheemla Nayak Song Adavi Thalli Maata: Fourth Single From Pawan Kalyan and Rana Daggubati’s Film Is Catchy (Watch Video).

Helmed by Saagar K Chandra, 'Bheemla Nayak' was released on February 25 and has apparently crossed Rs 100 crore at the worldwide box-office. Also, with Telugu movies being hyped well with impactful collections in the north belt, the makers seem to have taken this decision.

Though the makers could not release the dubbed version of the 'Ayyappanum Koshiyum' remake simultaneously, it seems like the stage is being set for the Hindi dubbed version to be out in theatres. But, as they say, 'No publicity is bad publicity', analysts believe that the team is erring by not promoting the movie for its Hindi release. PSPK Rana Movie: Pawan Kalyan’s Glimpse As Bheemla Nayak Looks Fierce (Watch Video).

(The above story first appeared on LatestLY on Mar 01, 2022 04:13 PM IST. For more news and updates on politics, world, sports, entertainment and lifestyle, log on to our website latestly.com).