As per the request by the producers guild, the makers of Bheemla Nayak decided to postpone the movie, backing off from the Sankranthi race. 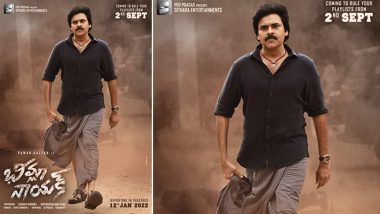 The release of Pawan Kalyan and Rana Daggubati-starrer Bheemla Nayak has been postponed as the makers made an official announcement regarding the same on Tuesday. As per the request by the producers guild, the makers of Bheemla Nayak decided to postpone the movie, backing off from the Sankranthi race. Pawan Kalyan’s Bheemla Nayak And Venkatesh Daggubati’s F3 Get Postponed – Reports.

Dil Raju, a member of Tollywood's producers guild stated, "The movies 'RRR' and 'Radhe Shyam' started almost 3 years ago." "Also, considering the fact that both of the movies have attained pan-India status with releases in multiple languages, we had requested the makers of 'Bheemla Nayak' to postpone their movie." Bheemla Nayak: Makers Release New Teaser of Rana Daggubati’s Daniel Shekar on His Birthday (Watch Video).

"We put the possible problems in front of the team, as there might be a clash in the theatre availability and other things. So, the team agreed to postpone 'Bheemla Nayak'. We thank them on behalf of the movie makers and producers," Dil Raju said. Bheemla Nayak was supposed to hit the screens on January 12, 2022. As RRR and Radhe Shyam are pan-India movies, the makers wanted to avoid a box-office clash, as it would have an impact on all the movies.

The makers of Bheemla Nayak are yet to announce the new release date. Being an original remake of Malayalam movie 'Ayyappanum Koshiyum', Pawan Kalyan portrays Biju Menon's role, while Rana Daggubati portrays Prithviraj Sukumaran's role in the movie. Directed by Sagar K. Chandra, 'Bheemla Nayak' is being made under the Sithara Entertainments banner, produced by Suryadevara Naga Vamsi.

(The above story first appeared on LatestLY on Dec 21, 2021 12:49 PM IST. For more news and updates on politics, world, sports, entertainment and lifestyle, log on to our website latestly.com).