Bheemla Nayak: Samyuktha Menon in Talks for Mahesh Babu’s Next

Malayalam actress Samyuktha Menon, who is making her debut in Tollywood with the much-hyped movie Bheemla Nayak, is in talks for Mahesh Babu's next. 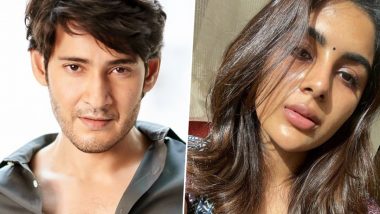 Malayalam actress Samyuktha Menon, who is making her debut in Tollywood with the much-hyped movie Bheemla Nayak, is in talks for Mahesh Babu's next. Tentatively titled #SSMB28 which will be directed by Trivikram Srinivas of 'Ala Vaikuntapuramuloo' fame, Mahesh Babu's yet-to-be-launched movie is likely to have Samyuktha Menon as one of the lead actresses. Vaathi/Sir: Shooting Of Dhanush, Samyuktha Menon’s Bilingual Film To Commence From January 5; View Pics From Puja Ceremony.

Telugu superstar Mahesh Babu will be joining hands with Trivikram after 11 years for #SSMB28. Though #SSMB28 is not yet launched formally, it is reported that the musical composition for the movie is to be taken care of by Telugu's most happening music director Thaman S. Also, the film is to be produced by S. Radha Krishna (Chinababu) under Haarika & Hassine Creations banner. Bheemla Nayak: Pawan Kalyan And Rana Daggubati All Set To Have A Face-Off On February 25; Check Out The New Poster.

Samyuktha Menon has landed another big name even before the release of Saagar K Chandra's action drama Bheemla Nayak. Samyuktha is to be seen as the love interest for Rana Daggubati, who is one of the lead actors in the Pawan Kalyan starrer. She is also to be seen alongside Tamil actor Dhanush in their upcoming movie titled "Sir".

(The above story first appeared on LatestLY on Jan 27, 2022 09:20 PM IST. For more news and updates on politics, world, sports, entertainment and lifestyle, log on to our website latestly.com).