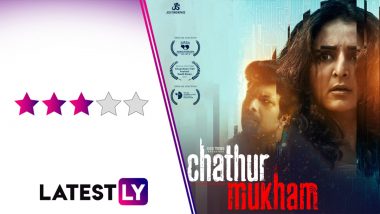 Chathur Mukham Movie Review: Considering we are in 2021 and are way too dependent on our smartphones, it is but natural that the best way for ghosts to haunt us is through electronic gadgets. That's a theme we saw in R Madhavan's underrated horror film, 13 B. In Chathur Mukham, the theme continues as we see spirits tormenting and murdering unsuspecting victims through their mobile phones. Chathur Mukham stars Manju Warrier in the lead, while Sunny Wayne and Alencier Ley Lopez play important roles. Chathur Mukham: Manju Warrier’s Horror Film Withdrawn From Theatres Due to Rise in COVID-19 Cases in Kerala, Actress Shares Update.

Manju Warrier plays Thejaswini, a spirited single woman who is obsessed with her smartphone and in taking selfies. She runs a tech agency with her former college mate and bestie, Antony (Sunny Wayne), where they supply CCTVs to companies and hospitals.

When her smartphone gets damaged in a freak accident, a low-on-cash Thejaswini buys a cheap phone from a local online supplier. The phone comes from an anonymous brand called Liza. The techie Thejaswini believes the brand is named after Apple founder Steve Jobs' daughter; too bad she isn't fan of late director Baby's movies, otherwise she would have been forewarned by that name. For her new phone brings her nothing but supernatural trouble.

With time running out for Thejaswini, she needs to discover the gruesome history behind the phone with the help of Antony and a sceptical science professor (Alencier Ley Lopez).

Chathur Mukham is made by the directorial duo, Ranjeet Kamala Sankar and Salil V, while it is written by Abhayakumar K and Anil Kurian. For most of its runtime, the movie is a very gripping thriller that, despite the absurdity of its premise, doesn't let go of the tension and the suspense. From the moment Thejaswini gets the haunted phone, the storyline keeps you reeled in as to how the smartphone heaps one paranormal problem after another on its owner. The mid-point revelation involving a doomsday countdown is interesting.

It also helps that Manju Warrier, also one of the film's producers, is cast in the lead role. An excellent actress that she is, Manju expertly portrays the mental breakdown of her character and also her resilient fight in not being the ghost's next victim. I also liked the fact that her bonding with Antony is kept platonic and friendly, never going into the romantic territory. Sorry, Maine Pyar Kiya, ek ladka aur ladki dost ho sakte hai! Sunny Wayne as Antony is quite likeable and funny. Antony is more of her support system and sounding board, but never needs to be her knight-in-shining armour.

Of course, the whole USP of Chathur Mukham - of the ghost using tech to haunt the victims - is what makes the movie arresting, especially when it tries to - borrowing The Martian's catchphrase, here - 'science the shit' out of the paranormal. It's a very unusual paradox (science exorcising blind faith), and the idea doesn't always work, but it is refreshing for an Indian horror film trying to tackle a ghost problem without a baba aur idols around, and using scientific methods! After Cold Case and now Chathur Mukham, it is good to see Indian horror going beyond the cliches of exorcism, though as with the Prithviraj film, Chathur Mukham retains some oft-beaten tropes associated with the genre. Cold Case Movie Review: Prithviraj Sukumaran and Aditi Balan's Spooky Mystery Thriller is Bogged Down By Predictable Twists.

Chathur Mukham begins to loosen its grip, predictably, when the mystery is unlocked and we know the reason why the spirit is being so vengeful. While the background story is merely passable, what often confounds me is the powers of the spirit that are quite inconsistent. In a scene, we see when Thejaswini drops the phone on the road, she finds it tough to pick it up. However, the spirit, for some reason, forgets it has this power which it could have used in the third act. Also, while it is established that the ghost uses electronic items to spread its terror, it then also ends up closing and opening doors, making you wonder what's the extent of its control. I am also curious why none of the other victims never felt anything strange about the phone, especially when the supernatural phenomena around Thejaswini felt too obvious to be ignored.

Also for a horror film, Chathur Mukham may maintain a thrilling atmosphere throughout but it is quite low on scares, the occasional ones being lazy tropes that we have seen before (nightmares, CGI ghost et al).  Technicall, the film impresses in its camerawork, sound department and editing, helping well enough to maintain the spooky atmosphere. The VFX, however, is not always upto the mark.

- An Intriguing Take on Haunted Possessions

While the plotholes are quite glaring, Chathur Mukham deserves appreciation for maintaining a tight narrative that goes beyond usual horror cliches, with a dependable Manju Warrier comfortably carrying the film on her strong shoulders. Chathur Mukham, released in theatres on April 8, is streaming now on Zee5 India.

(The above story first appeared on LatestLY on Jul 12, 2021 08:11 PM IST. For more news and updates on politics, world, sports, entertainment and lifestyle, log on to our website latestly.com).