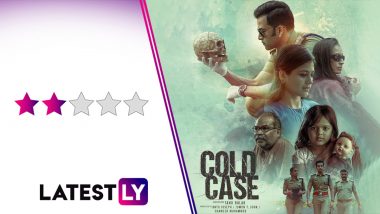 Cold Case Movie Review: One thing I hate about some of the recent mystery thriller movies in Malayalam cinema these days, is how they build up so much intrigue, only to let down that immense potential in a tepid finale. To re-quote a character in Mirzapur, the popular Amazon Prime series, 'garam karke chod diya' (leaving you cold, after the sizzling foreplay). Interestingly this recent observation is for a film that has landed on the same platform - debutant Tanu Balak's Cold Case, starring Prithviraj Sukumaran and Aditi Balan in the lead. Tanu Balak On Shooting Cold Case During Pandemic: We Didn't Have Any Problem, We Had All Protocols In Place.

Cold Case is about a cold-blooded murder that links two separate happenings in the city. A fisherman discovers a skull wrapped in a plastic bag in a river, and this leads to ACP Sathyajit (Prithviraj Sukumaran, suave and elevates the character) to investigate who the victim is, the person's killer and the motive.

In another part of the city, Medha (Aditi Balan, decent at best) is a journalist who hosts show on real-life supernatural happenings. Reel meets real for her, when she moves into a new rental house with her kid and is spooked by certain paranormal activities there. She begins to find who the spirit is and what it wants from her. How these two strands eventually intertwine to reveal the big twist is what the rest of Cold Case is about.

I could find a lot in common between Cold Case and Nizhal, another murder mystery that plays with supernatural themes (though to give the latter some brownie point, it nicely pulls the rug about the paranormal bit). In Cold Case, there is a ghost story that runs parallel to the investigation story, and kinda leaves you in rooting for which track you are more invested in. Nizhal Movie Review: Kunchacko Boban and Nayanthara’s Psychological Thriller Fails To Make Best Use of a Captivating Central Mystery.

If you ask me, I would rather stick to Sathyajit's investigation track, purely because of my age-old stickling for whodunit sagas. Medha's spooky storyline is interesting, yes, but not as scary as you expect it to be. The track is quite reminiscent of the plentiful of haunted house movies we have seen in the past, including The Conjuring series, replete with dripping water, predictable jump-scares and spookier shamans (in this case, Suchitra Pillai's medium character). The curiosity is there as to how this is linked to what Sathyajit is seeking, but sometimes I wonder if this was more of a padded-on track.

Why I feel so is mostly because the horror track is put on a side-burner in the second half to focus more on Sathyajit's findings. Still, Cold Case does manages to keep you arrested with the pacing, the sense of mystery and the acting.

Alas, then comes the downer of a third act. The reveal of the culprit turns out to be disappointingly predictable (which is expected, when you only have a handful of characters to choose), but even more disappointing is how Sathyajit leads to the person's identity. Not dropping any spoilers, but the makers have involved some very convenient tropes to get to that conclusion (Sathyajit's uncle conveniently being on the same bus as the killer). Also since COVID-19 plays an integral part in revealing the killer's modus operandi - which means it is set in present times - why are none of the characters seen wearing masks even when they are outside?

The only relief here is that, unlike a certain viral fan theory going around, Cold Case doesn't follow the route of Mumbai Police and 7th Day. The final fate of the killer also feels pretty weakly written. Have to say that the Pretham series have been doing this horror-murder mystery blend better. At least there are some laughs there!

PS: Cold Case has one of the last screen appearances of the late Anil Nedumangad who passed away last month. May his soul rest in peace.

As a supernatural investigative thriller, Cold Case starts off fine, keeps you invested in the middle but leaves you cold in the end. The movie is streaming on Amazon Prime Video.

(The above story first appeared on LatestLY on Jun 30, 2021 03:03 AM IST. For more news and updates on politics, world, sports, entertainment and lifestyle, log on to our website latestly.com).