Chiranjeevi to Step into Thala Ajith's Shoes for the Telugu Remake of Vedalam? 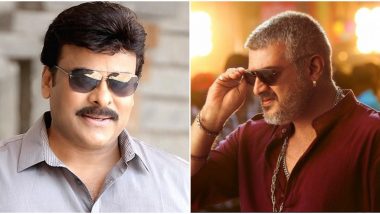 Chiranjeevi in the Telugu remake of Vedalam? (Photo Credits: Instagram)

Here's big news coming for all Chiranjeevi fans. The actor has mostly decided to sign the Telugu remake of Thala Ajith's previous blockbuster, Vedalam. Earlier there were reports about the actor considering this remake in his future lineup but if recent reports are to believe, he has already given his nod to it and will start working on it next. The project will be reportedly directed by Meher Ramesh, who earlier helmed the Telugu version of Ajith's Billa. Trisha Walks Out Of Chiranjeevi's Acharya Citing 'Creative Differences' - Read Tweet.

The original film released in 2015 and it revolved around a taxi driver who helps police nab three criminals. His bravery, however, invites the wrath of a criminal network and what follows next is a rather intriguing tale. The film was a huge success at the Tamil box office and its Telugu version is expected to garner equal praises. While Chiranjeevi was earlier reported to start shooting for Mohanlal's Lucifer's remake next, he has apparently put that project on hold. RRR: SS Rajamouli's Shooting Schedule With Ram Charan Will Benefit Chiranjeevi's Acharya - Here's How!

Megastar Chiranjeevi is currently looking forward to finishing the shooting of Acharya. The film also stars Ram Charan and the hunt for his leading lady is on. Once the actor completes shooting of his ongoing project, he'll start working on Vedalam remake and then plan his future outings. Till then, let's keep praying for an official announcement to drop very soon.

(The above story first appeared on LatestLY on Aug 10, 2020 09:38 PM IST. For more news and updates on politics, world, sports, entertainment and lifestyle, log on to our website latestly.com).