There are reports that suggest that SS Rajamouli will start working with Ram Charan and finish his schedule on time to help him carry on with Chiranjeevi's Acharya. 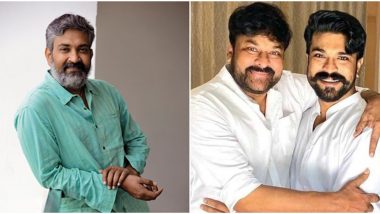 SS Rajamouli's RRR is one of the many prominent releases in the South that's waiting to resume its operations. The unit is expected to get back in action by this month-end and going by recent reports, the director is planning to shoot the scenes with Ram Charan first. As per a new report in Tollywood.net, Chiranjeevi has requested Rajamouli to finish shooting his scenes with Charan so that he can start working on Acharya and the director has willingly agreed. SS Rajamouli's RRR to Be the First Film to Resume Shoot With a Limited Crew Following Social Distancing Guidelines?

However, he'd additionally need Alia Bhatt and Ajay Devgn's dates to finish Ram Charan's complete schedule. Firstly, he plans to shoot the fight scene with Charan and Jr NTR in an aluminium factory and later erect the Pune City's set in Hyderabad which will be used for his combination scenes with Alia. The director is still figuring out his future schedules and if all goes well, the film will hit the big screens in January 2021 as announced earlier.

Once Ram Charan gets free, he'll directly start working with father, Chiranjeevi in Acharya. The actor has a crucial role to play in the movie and the makers are expected to resume its shooting in August. RRR: Alia Bhatt to Have a Love Triangle with Jr NTR and Ram Charan? Director SS Rajamouli Answers...

There are also reports that Ram Charan and Jr NTR will have Rs 18 crore set ready when they resume the shooting in June. The director is in no mood to delay his ambitious project any further. It was earlier slated to release in July 2020 but was pushed to January after their shooting got delayed and this was way before corona made its entry in India.

(The above story first appeared on LatestLY on Jun 05, 2020 06:58 PM IST. For more news and updates on politics, world, sports, entertainment and lifestyle, log on to our website latestly.com).