An assistant director, art assistant and production assistant lost their lives after a massive crane fell on them on the sets of Indian 2. Nine other technicians have been injured in this mishap. Not only everyone associated with the film, but fans too are heartbroken after hearing the news. 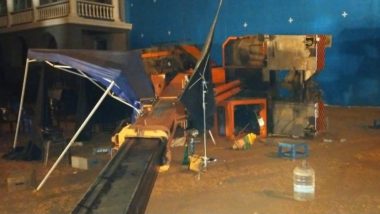 In an unfortunate turn of events, three people named Sai Krishna, Chandran and Madhu from the unit of the upcoming film, Indian 2 died, while nine others were seriously injured in an accident after a crane fell on them while constructing the sets for the shooting on Wednesday (February 19). They were taken to the nearest hospital where the injured are receiving treatment. Directed by S Shankar, Indian 2 is a sequel to the hit movie Indian that featured Kamal Haasan. The second part stars Kamal along with Kajal Aggarwal. The mishap took place EVP Film City in Chennai. Needless to say, everyone associated with the film is shocked and sad at this moment. Haasan took to Twitter soon after the news broke and condoled the death of the three people and hopes that the injured crew members recover soon.

Kajal also sent out a tweet expressing her shock and trauma because of the accident. Indian 2: Kamal Haasan Condoles Death Of 3 Members Who Died On The Sets Of His Upcoming Film.

Check out the tweets by Kamal and Kajal right here:

Words cannot describe the heartache I feel at the unexpected,untimely loss of my colleagues from lastnight.Krishna,Chandran and Madhu.Sending love,strength and my deepest condolences to your families.May god give strength in this moment of desolation. #Indian2 @LycaProductions

In so much shock, denial, trauma from the monstrous crane accident last night. All it took was a fraction of a second to stay alive and type this tweet. Just that one moment. Gratitude. So much learning and appreciation for the value of time and life. 🙏🏻🙏🏻🙏🏻

Not only the cast and crew of Indian 2, but the fans too are also heartbroken after hearing this news. Many of them have shared condolences for the deceased and are hoping for the speedy recovery of the injured. Check out some of the tweets right here:

Disaster strikes the #Indian2 unit. TV News reports coming in that 3 ppl dead in a mishap with the crane @ EVP Film City. 10+ ppl injured badly too.

Strength to the crew in these tough times 🙏🙏

May the departed souls RIP 😔 pic.twitter.com/gfrgAAva1i

As a mark of respect to the 3 lives lost and many injured, I have changed my DP to Black. Its a Black Day for Tamil Cinema and hope the #Indian2 crew comes over this trauma soon. Praying for the speedy recovery. #Indian2Accident

Extremely Saddened By Hearing This News

May All Their Souls Rest In Peace #Indian2Accident #Indian2 https://t.co/IRJS9xdyTX

With all due respect for the affected victims & their families, this only brings into question the protocols in place for health and safety in the workplace. Hopefully producers look closer into it.

As some fans rightly pointed out, it's time for the authorities to have some protocols in place when it comes to the safety on film sets. We at LatestLY pay deep condolences to the families of Krishna, Madhu and Chandran, and hope for the speedy recovery of the injured technicians.

(The above story first appeared on LatestLY on Feb 20, 2020 02:14 PM IST. For more news and updates on politics, world, sports, entertainment and lifestyle, log on to our website latestly.com).