Jwala Gutta Confirms Being in a Relationship with Vishnu Vishal, Says Marriage Will Happen Soon

Yes, love is indeed in the air for Jwala Gutta and Ratsasan actor, Vishnu Vishal. 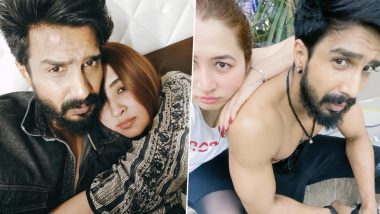 Love is in the air for Ratsasan actor, Vishnu Vishal and ace badminton player, Jwala Gutta. The lovebirds who had managed to keep their relationship under wraps have finally reacted to their dating stories and their affirmative replies have only warmed our hearts further. Earlier the sports player had posted pictures with the actor on her Twitter account saying she's missing her boo and though there was no clarity on their relationship status then, she has recently confirmed the same in her interaction with a daily. Vishnu Vishal and Amala Paul to Step into Nani and Shraddha Srinath's Shoes for Jersey's Tamil Remake.

In her interview with a Tamil daily when the athlete was asked about her relationship rumours, she replied saying, "Yes, we are dating. Like I said already, there is nothing to hide. We will get married soon, and once the dates are fixed or we begin the arrangements, we will announce it." Earlier Vishnu in his interaction with Bombay Times had confirmed his relationship and had further elaborated on how they have known each other for over a year and share many mutual friends. Did Jwala Gutta Take a Dig at Saina Nehwal for Joining BJP? Twitterati React on Cryptic Tweet.

Jwala had earlier tied the knot with badminton player, Chetan Anand in 2005, however, they parted ways in 2011. Vishnu meanwhile was married to costume designer Rajini Natraj for seven years and got divorced in 2018.

(The above story first appeared on LatestLY on Apr 01, 2020 09:53 AM IST. For more news and updates on politics, world, sports, entertainment and lifestyle, log on to our website latestly.com).