Kaadan is a trilingual film which is titled Haathi Mere Saathi in Hindi. The Tamil trailer of the film was released today which has Rana Daggubati doing some stunning stunts. The movie also stars Vishnu Vishal, Zoya Hussain, Shriya Pilgaonkar and Anant Mahadevan. 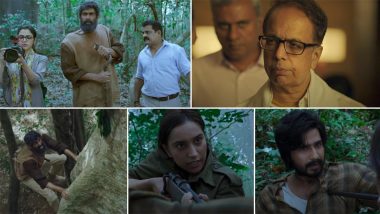 The much-anticipated trailer of Kaadan is finally here. Ever since it was announced, people were excited to watch a movie with elephants in it. As is expected, the trailer is action-packed with Rana Daggubati leading the cast. He is a jungle man, living with animals and has a deep bond with the elephants. It's a reserved forest and when its existence gets threatened, this man doesn't think twice to take it on himself to save the land and the elephants. Rana is shown as a 50-year old man who lives in the jungle. Rana Daggubati’s Trilingual Film Kaadan/ Haathi Mere Saathi To Release In Theatres On March 26 (View Tweet)

Ananth Mahadevan plays a greedy politician. He joins hands with people who want to erase the forest land to build a township and gain profits from it. But Rana wouldn't let anyone destroy the natural ecosystem that he has grown in. Supriya Pilgoankar plays a journalist who wants to capture his life in the jungle and gets to see the chaos unfold. Vishnu Vishal looks like a guy with conflicted interests while Zoya Hussain could easily be the surprise package here. She looks extremely fierce in her role.

Check out the trailer of Kaadan here

Kaadan is a trilingual film that will also have a Hindi version called Haathi Mere Saathi. It is titled Aranya in Telugu. The film will release with all three versions on March 26 and is directed by Prabhu Solomon.

(The above story first appeared on LatestLY on Mar 03, 2021 12:56 PM IST. For more news and updates on politics, world, sports, entertainment and lifestyle, log on to our website latestly.com).