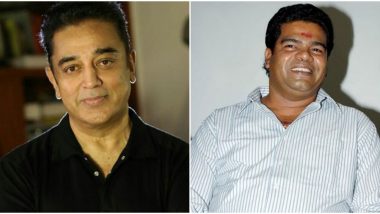 Ponnambalam is a popular actor, predominantly known for his works in Tamil Cinema. Widely known to play negative roles in films, it has been reported, that this Kollywood actor has been admitted to a hospital in Chennai due to kidney-related ailments. As per a report in TOI, as soon as superstar Kamal Haasan heard about Ponnambalam’s health condition, the actor-politician has lend financial help. Jayanthi, Veteran Actress Of Kannada Cinema, Admitted To A Hospital In Bengaluru (Read Details).

As per reports, Kamal Haasan had a word with Ponnambalam over the phone. The former’s team is reportedly keeping a track of the latter’s health condition and doing the needful. The report further states that Haasan would be taking care of Ponnambalam’s children’s educational expense as well. A video of Ponnambalam from the hospital has hit the internet in which he is seen put on a oxygen mask. Navya Swamy, Telugu TV Actor, Tests Positive For COVID-19.

Before Ponnambalam made his debut in the Tamil film industry in 1988 with the film Kaliyugam, he entered the world of cinema in 1987 as a stuntman. He has appeared in minor roles and even as extra fighter in movies. Ponnambalam got his breakthrough with the film Walter Vetrivel, released in 1993. Some of his notable works include Nattamai, Muthu and Amarkalam. In 2018, Ponnambalam had participated in Bigg Boss Tamil Season 2, hosted by Kamal Haasan. He was evicted during the eighth week of the controversial reality TV show. We wish Ponnambalam a speedy recovery!

(The above story first appeared on LatestLY on Jul 10, 2020 02:19 PM IST. For more news and updates on politics, world, sports, entertainment and lifestyle, log on to our website latestly.com).