Veteran actress Jayanthi, known for her works in Kannada Cinema, has reportedly been admitted to a hospital in Bengaluru after she complained of breathing difficulties. 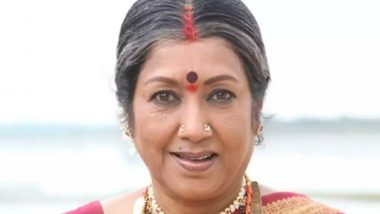 Veteran actress Jayanthi, known for her works in Kannada Cinema, has reportedly been admitted to a hospital in Bengaluru after she complained of breathing difficulties. According to a report in TOI, Jayanthi complained of breathing issues on July 7 and she was immediately rushed to a hospital in Bengaluru. The veteran actress is reportedly suffering from asthma and but is doing better now. Odia Actor Bijay Mohanty Suffers Cardiac Arrest, Hospitalised In Hyderabad.

The report further states that it was Jayanthi’s son Krishna Kumar who took her to a private hospital and is being treated by Dr Sathish. The actress’ son has confirmed that her health condition is stable. The actress also underwent a mandatory COVID-19 tested and the report came out negative. As per reports, Jayanthi has been suffering from asthma for the past three decades. She has reportedly being using inhalers due to it. Veteran Tamil Folk Singer and Actress Paravai Muniamma Passes Away in Madurai.

Jayanthi has featured in more than 500 films. Besides appearing in Kannada movies, the veteran actress has also appeared in Telugu, Tamil, Malayalam, Hindi and Marathi films too. She has received numerous accolades for her brilliant performance. The Kannada film industry has honored Jayanthi with the title ‘Abhinaya Sharadhe’. Various media outlets has labelled her as the ‘most bold and beautiful’ actress of Kannada Cinema. We wish for her speedy recovery.

(The above story first appeared on LatestLY on Jul 08, 2020 12:32 PM IST. For more news and updates on politics, world, sports, entertainment and lifestyle, log on to our website latestly.com).