Sulthan starring Karthi and Rashmika Mandanna in the lead is produced under the banner of Dream Warrior Pictures. The team was shooting at Malaikottai in Dindigul when some protestors tried to stall the shooting of the film claiming the film is based on warrior king Tipu Sultan. 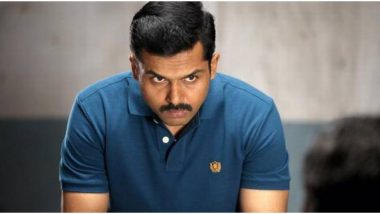 Sulthan starring Karthi and Rashmika Mandanna in the lead is produced under the banner of Dream Warrior Pictures. The team was shooting at Malaikottai in Dindigul when some protesters tried to stall the shooting of the film claiming the film is based on warrior king Tipu Sultan. As per reports, the members protested stating that a film on a Muslim ruler should not be shot at a Hindu temple. As per a report in Deccan Chronicle, members of Hindu Munnani, Hindu Makkal Katchi and Shiv Sena protested during the time of the shoot.

Sulthan which is also known as Karthi 19 is produced by SR Prabhu under the banners of Dream Warrior Pictures. DC quoted him saying, “We were shooting for the last few days at Malaikottai after taking prior permission. September 24 was actually the final day of the shoot and our cast and crew were almost wrapping up the shoot when, all of a sudden, the people who are supposed to be from Hindu Munnani started protesting. It was not clear about what they were creating such a commotion. Moreover, we have not finalised the title yet. There was no clapboard or any other material, which had the alleged Sulthan title. Even assuming the title is Sulthan, what’s their problem?”

In the statement released by the production company, they have clarified that team had sought all permissions before the shooting. The statement translated reads, “Of late, people have begun to attack films for their own publicity. The censor board should decide what a film must show and not show. Apart from this, it is a filmmaker's choice to choose what he wants to showcase in his venture. This is a basic right that we have been given. We strongly condemn any organisation or individual attacking the freedom of creative artistes,” reports India Today. Sulthan is directed by Bakkiyaraj Kannan.

(The above story first appeared on LatestLY on Sep 26, 2019 03:57 PM IST. For more news and updates on politics, world, sports, entertainment and lifestyle, log on to our website latestly.com).