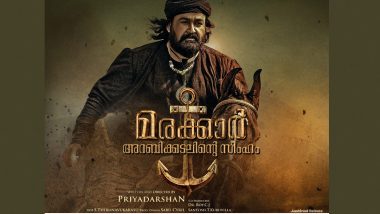 Marakkar: Arabikadalinte Simham is the upcoming Malayalam film that is directed by ace filmmaker Priyadarshan. The film features a stellar cast with superstar Mohanlal in the lead. The film is bankrolled by Antony Perumbavoor under the banner of Aashirvad Cinemas. It is indeed one of the most-anticipated movies of the year. The film has seen several delays owing to the ongoing pandemic situation. But fans are thrilled that Marakkar will have a grand release in theatres. Marakkar Teaser 2: Mohanlal Is Fierce as He Fights With His Enemies in This Power-Packed Peek From the Movie! (Watch Video).

There’s just few days left for Marakkar to be released, the movie that bagged top honours at the 67th National Film Awards. It won awards for Best Feature Film, Best Special Effects and Best Costume Design. Ahead of the film’s theatrical release in Malayalam along with its dubbed versions in Tamil, Telugu, Kannada and Hindi languages, let’s take a look at some of the key details of Marakkar.

The upcoming film is based on a true story of Kunjali Marakkar IV. Set in the 16th century Kozhikode (Calicut), this magnum opus will showcase the legend’s epic warfare against the Portuguese.

The trailer of Marakkar gives a glimpse of Kunjali Marakkar IV’s tale against the Portuguese and it is a visual treat.

Marakkar was earlier scheduled to be released in March 2020, however, the makers decided to postpone its release due to COVID-19 outbreak. Then again the team planned to release the movie in May 2021 that further got delayed to August 2021. After several delays, the film will finally release on December 2, 2021.

Here's the review of Marakkar: Arabikadalinte Simham and we've given the Mohanlal starrer 2 stars.

(The above story first appeared on LatestLY on Nov 30, 2021 06:21 PM IST. For more news and updates on politics, world, sports, entertainment and lifestyle, log on to our website latestly.com).