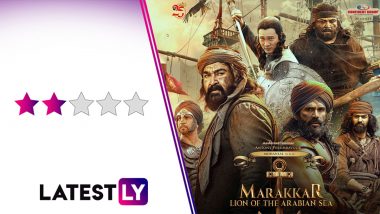 Marakkar Movie Review: Marakkar: Arabikadalinte Simham, or as the English title goes Lion of the Arabian Sea, forgets the fact that it needs to show more of the Arabian sea to live upto that title. Especially in the second half. Marakkar, directed by Priyadarshan, is a visual epic, boosted by its lead star Mohanlal's superstar patronage, and bringing a huge cast filled with popular stars, while trying to live upto a very grand vision. Seeing the painstaking efforts in trying to enrichen the grandeur and in roping such a big cast, I wish Priyan and his team would have conjured  half a decent screenplay to live upto those efforts. Marakkar’s Theme Music From Mohanlal’s Historic Saga Is Grand and a Perfect Fit for the Magnum Opus!

Marakkar: Arabikadalinte Simham is based on the exploits of a 16th century outlaw-turned-naval hero Muhammed Ali aka Kunjali Marakkar the IV (Mohanlal). The movie explores his life from his youth (where he played a far more energetic Pranav) to being a local Robin Hood who is a legend for the masses and the classes, and then being promoted to being the Naval admiral for the Zamorin to battle the invading Portuguese, and finally his betrayal and death. In between, we get to see him make his own band of merry men, that includes his uncle Pattu Marakkar (Siddique) and his portly friend Thangudu (Prabhu), and also a Chinese prisoner turned loyalist Chinali (Jay J Jakkrit). There are naval battles, unity-breaking politics and betrayals, a love story that ends in tragedy and some misunderstandings that cost heavily to Marakkar.

Watching Marakkar: Arabikadalinte Simham in theatre is like a two-sided coin. On the good side, it is quite immersive an experience to dip in the kind of visuals Priyadarshan had brought for a casual Malayali viewer. The grandiose imagery, be it in a static frame (the one with a tree filled with red blossoms standing tall in a barren land is my fave) or in the naval battle sequence when Marakkar outwits the Portugal navy, is something Malayalam cinema has not experienced till now. Kudos to Tirru's sweeping cinematography, Sabu Cyril's excellent production design, and to the VFX team led by Sidharth Priyadarshan (that National award win is deserving there, though I can't say the same about Marakkar's Best Film win).

Despite a cloying narrative that brings nothing new, the first half of Marakkar is still enjoyable because it is rich in visuals and in spectacles. The naval battle sequence before the interval is the highlight of the movie. Unfortunately, that's the peak, and from thereon, Marakkar goes tumbling down the slope, struggling to stop its fall and rise above its mediocre script (Priyadarshan, Ani IV Sasi). Marakkar Vs Tadap: Suniel Shetty To Clash With Son Ahan Shetty at the Box Office This Weekend.

Which brings us to the second side of the coin in Marakkar's theatrical experience. Saddled with a weak and predictable screenplay and a runtime that crosses 3 hours, Marakkar is also a slog to watch. Editing is not upto the mark, be it in containing the humungous runtime or in transitioning from one sequence to another. Like for example, after killing his traitor uncle, the scene where a young Kunjali runs away from his men and then saves a puppy in the process, is abruptly cut to him and his uncle in a stormy sea. How he escaped from there is left in the dust. Similarly, how he managed to be leader of Thangudu and his acolytes is also left to our imagination.

In the beginning of the film, there is a disclaimer that the makers have taken imagination and cinematic liberties to fill in the huge gaps in Marakkar's life (including changing the circumstances in which he is betrayed). Unfortunately, the imagination used to fill those gaps is pretty unimaginative, pardon the irony there. The kind of narrative that Marakkar uses is a similar one taken by another grand period drama we saw in Mollywood a couple of years back - Kayamkulam Kochunni - that also had Mohanlal in a cameo and featured a similar third act betrayal by someone close to the protagonist (I was also reminded of another Priyadarshan's '90s gangster movie in that aspect, which also starred Lalettan).

Once the fun of seeing the huge cast (most of them leaving not much impact) the awe of the visuals drop (helped by a very barren second half... what happened? Ran out of budget here?), the lag in the screenplay is definitely noticed here, as well as the laziness in the writing. There is a heavy infusion of melodrama that accentuates the lag. Certain crucial subplots, like the romantic track between Chinali and Aarcha (Keerthy Suresh), only pass muster, despite them playing a major part in bring conflict to the plot. There is a certain kind of laziness in how this track ends, where a simple shout could have cleared a very major misunderstanding. If that's not enough, Priyadarshan goes back to relying on his 'inspirations' in the script. A duel between two major characters in the second half and its grim aftermath is lifted from Wolfgang Petersen's Troy, while a roundtable discussion between Portuguese general and Zamorin and his associates that ends on a bloody note is uncannily similar to an iconic scene in Brian De Palma's The Untouchables.

Coming to its lead actor, Mohanlal is not exactly in the best of form here. The mass performer in him impresses in the scenes where he has to deliver grand speeches, but otherwise the material doesn't allow the superstar to bring out the best in him. Mohanlal is also let down in the action department, with the use of hazy camera movements, wire stunts and slo-mo sequences that dilute the impact of the fight scenes. This is especially noticeable when we compare them with the energy that his son, an accomplished parkour expert, brings to his scenes early on, or when Arjun and Jakkrit are in the fray.

Among the supporting cast, only a handful leave a mark. The pick of the lot being Arjun Sarja, Hareesh Peradi (terrific in the funeral scene) and Siddique (helped by the screentime allotted to him). Manju Warrier, Suniel Shetty (why is he cast as a Malayali aristocrat?), Mukesh, Innocent et al are wasted in their roles. Veteran actor Prabhu, who had overshadowed Mohanlal in Priyadarshan's last Malayalam period epic Kaala Paani, is merely sort of here as Marakkar's 'Little John'. Keerthy Suresh couldn't do much in a weakly written role, while Tamil actor Ashok Selvan is stuck with a sneer on his face throughout as one of the villains. However, it is touching to see the late Nedumudi Venu as the aging Zamorin in what could be his last screen appearance.

The songs, bar for the lilting "Ilaveyil", also don't manage to make an impression, a rarity for a Priyadarshan-Mohanlal film. Rahul Raj's BG score is impressive, though for any The Witcher 3 fans out there, is the main theme score similar to a tune played during the game?

PS: For all the authenticity that Marakkar brings in the visuals and the production design, why was the same not lend to the language? Why the need to have Portuguese army speak in English when you are using subtitles anyway? Is it so that Marakkar can have that front-bench pleasing F-bomb moment in the third act?

- The Painstaking Efforts to Bring About the Visual Splendor

- The Subpar Screenplay and Lagging Runtime

Marakkar: Arabikadalinte Simham roars through its first half thanks to its splendid visuals and scale, but gets terribly ship-wrecked in a sorry excuse of a script otherwise. Lower your expectations, and perhaps, you can walk away from this Mohanlal-starrer still in awe of its grand vision. That is, if you can bear its meandering screenplay for about three hours.

(The above story first appeared on LatestLY on Dec 02, 2021 02:58 PM IST. For more news and updates on politics, world, sports, entertainment and lifestyle, log on to our website latestly.com).