Lokesh Kanagaraj's directorial Master starring Thalapathy Vijay and Vijay Sethupathi has been ruling hearts from the time it made was released in the theatres. Now, as a surprise to fans, Amazon Prime Video has dropped a 4.50-minute unseen clip from the movie and well fans are going crazy about it. Watch! 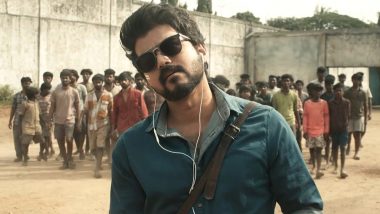 Lokesh Kanagaraj's directorial Master starring Thalapathy Vijay and Vijay Sethupathi has been ruling hearts from the time it made was released in the theatres. Not just this, the film also fared well at the ticket window proving that the audiences are ready to see movies on the big screen. However, there were a few scenes from the Tamil blockbuster that were deleted from the theatrical version due to its excessive length. But now, as a surprise to fans, Amazon Prime Video has dropped a 4.50-minute unseen clip from the movie and well fans are going crazy about it. Master: Thalapathy Vijay’s Blockbuster Film To Premiere On Amazon Prime Video On January 29.

For the one's unaware, after its theatrical release, Master was out on Amazon Prime and in a way to attract more viewers, this might be a move from the makers and the OTT platform. The deleted scene which is out on the internet, sees Vijay, as the professor of the college, taking a stand against the faculty as well as parents for his students. As soon as this scene was out, fans are in no mood to keep calm. Master: Theatre Owners Demand 10 Percent Extra Share Due to Early Release of Thalapathy Vijay Starrer on Amazon Prime Video.

Here's How Fans Are Reacting:

This Man has evolved so much in terms of performance, appearance & most importantly his take on things & Perspectives🔥

From Coke ads to Kaththi; Sivakasi to Master

As a girl fan so so proud of U Thalapathy @actorvijay !!

If the deleted scene was included in the movie, & if the unnecessary scenes were removed from the movie, it would’ve been complete 🙌🏼❤️💯. #Master

We Can Feel You!

This is a deleted scene from the movie #Master everyone says that.... That is why such a good scene was omitted from the film! 😑@actorvijay #MasterOST #25DofColossalBBMaster pic.twitter.com/Ib1kbo7QKL

In the deleted scene of #Master , loved the voice of @raveena116 for @MalavikaM_

Easily would have been a most loved scene by the ladies @Dir_Lokesh machan kudos for that scene writing. Asual #Thalapathy mastered it with his dialogue delivery and body language

Master was released on Amazon Prime Video on January 29. 2021, whereas it hit the silver screen during Pongal on January 13, 2021. The story of the movie revolves around Vijay who is sent to juvenile school because of being an alcoholic. However, there he gets at loggerheads with a gangster. Apart from the leads, the flick also sees Malavika Mohanan, Andrea Jeremiah, Shanthanu Bhagyaraj, Arjun Das in key roles. Stay tuned!

(The above story first appeared on LatestLY on Feb 07, 2021 12:15 PM IST. For more news and updates on politics, world, sports, entertainment and lifestyle, log on to our website latestly.com).