And it's out finally! Check out Thalapathy Vijay's intriguing second look from Master. 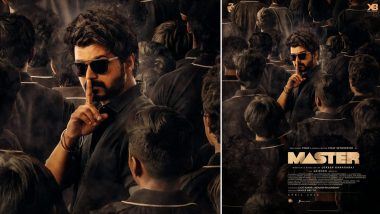 While the Bigil mania refuses to recede, Thalapathy Vijay is already moving ahead with his next big release. The Mersal actor's next will be Master, an action thriller helmed by Lokesh Kanagraj. While his first look from same was unveiled last year, makers decided to treat his fans with a Pongal treat by unveiling his second look from it. Vijay's new look from Master is now making enough noise on the internet and we won't be surprised if it eventually becomes the top trend by tonight. Master: Fans Trend #BoxOfficeBaashaVIJAY After Thalapathy Vijay and Vijay Sethupathi's Film Gets Distributed at Astronomical Rates.

Vijay's intriguing look from the film's new poster has gotten us eager beaver to understand its storyline. While not much is known about his next big outing, we can assure you that it's going to be another awesome treat for all Thalapathy fans. Vijay fans are going berserk over Master's second look and we aren't hesitating to count ourselves one among them. Most Tweeted Hashtags 2019 India: Thalapathy Vijay's Bigil Joins Marvel's Avengers: Endgame in Top 10, Is the Only Indian Film on the List.

Master has a stellar star cast of Vijay, Vijay Sethupathy and Malavika Mohanan. The Beyond the Clouds actress will romance Thalapathy in his new release and their chemistry is something that we're eagerly waiting to witness. The movie is expected to hit the screens in April 2020.

(The above story first appeared on LatestLY on Jan 15, 2020 05:36 PM IST. For more news and updates on politics, world, sports, entertainment and lifestyle, log on to our website latestly.com).