Nayatu is a political cop thriller directed by Martin Prakkat and written by Shahi Kabir. The movie stars Kunchacko Boban, Joju George and Nimisha Sajayan in the main roles. Nayattu, released in theatres on April 8, is now streaming on Netflix. 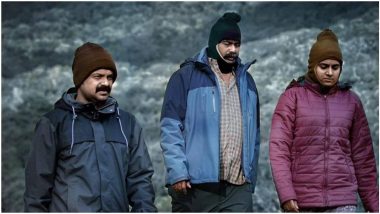 There is hardly any doubt that Nayattu is bound to ruffle some political feathers. I will discuss why so ahead, but first let me talk about how Martin Prakkat has scored 4-0 when it comes to being a fine filmmaker. After making his debut as a director with the Mammootty-starrer Best Actor in 2010, Prakkat has gone from strength to strength as a filmmaker, with Nayattu, released six years after his last, Charlie, being the best of the lot. Nayattu Movie Review: Kunchacko Boban, Joju George and Nimisha Sajayan Star in One of the Best Cop Thrillers in Recent Times, if Not the BEST!

A political thriller about three cops on the run, Nayattu stars Kunchacko Boban, Joju George and Nimisha Sajayan in the lead. They play the aforementioned cops who turn fugitives after the system they have sworn to protect turns against them. Their misfortunes begin when Maniyan (George) and Praveen (Boban) clash with a bunch of hooligans at the police station, who turn out to members of a Dalit organisation. Later they, along with Sunitha (Nimisha) are involved in an road accident that leads to the death of one of those goons. While the vehicle was driven by Maniyan's nephew, the trio are implicated in the crime because the nephew ran away and they have a history with the deceased. With the elections happening at the moment, it was important for the ruling party to get them arrested, and Maniyan knowing that they can never get out of it easily, prompts them to run.

This leads to a terse chase between these fugitive cops and a team of police officers, as the state goes into by-elections. If you think Nayattu leaves you with a sense of exhilaration by the end, where our protagonists manage to save their skins and come out victorious, look around and see have we ever truly managed to save ourselves from a wrathful, inconsiderate system?

So without further ado, let's decode the various aspects of the climax.

The most shocking and unexpected thing that happens in the climax is when Praveen and Sunitha are chased by Special force team, they stumble upon Maniyan's dead body. Maniyan had hung himself out of guilt, regret and betrayal. In the earlier moments of their hiding out, Maniyan had lost himself in alcoholism as he realises that he has been a failure to his own daughter and now his own subordinates. There is this guilt in him that his daughter might have to suffer a stigma of being a murderer's daughter, and also his subordinates who chose to follow him without thinking much for themselves as to what is right. It also doesn't help that he has run out of medicines that could have controlled his stress.

Being in the field for long, Maniyan thought that his dying confession would be a reprieve for all of them. The fact that he chooses to do so in broken down local court makes his demise even more ironic, showing his desperation to get justice from a broken down system. Alas, that was not meant to be...

Maniyan's dying by suicide had opened up a new can of worms for SP Anuradha (Yama Gilgamesh) and her team who have been chasing the fugitives. In trying to meet the deadline set by the Chief Ministers, Anuradha had suggested to her senior to present three decoys at the press conference so that the government can save their face, while they lay trap on the trio.

However, with Maniyan being dead, the police are caught in a trap they themselves set, having only only two alive culprits now. The CM also washed his hands off the matter, threatening to put the whole blame on the department for passing wrong information. To save face, the police team tries to make it look like Maniyan committed suicide at the guesthouse where they were kept, out of guilt for killing a man.

Anuradha was against it, notice how she doesn't stop Praveen from escaping with Maniyan's mobile phone that has his dying declaration in it, Unfortunately, even her hands are tied up. As her subordinate, played by the late actor Anil Nedumangad puts it, another IPS officer tried to expose the government and it put him behind the bars for two years for doing so. This could be a reference to the tragic situation of the controversial ex-officer Sanjiv Bhatt.

To make Praveen and Sunitha toe the line, a senior officer tells them to give a statement against Maniyan and go by what they are told. When Sunitha protests, the officers destroys the memory card of Maniyan's phone, thus erasing his dying declaration. He also shows them the video of Maniyan's nephew, who now claims that while he was indeed driving the vehicle, Maniyan deliberated swerved the steering when he saw the victim approaching.

With their last hope of making that nephew pay for his crime now lost, Sunitha and Praveen looks defeated as they are taken to the court. Whether they will place the entire blame on Maniyan or not, remains to left to our interpretation, but their body language in the last scene shows they might cave in.

The fact that they are taken away on the day that voting is happening, shows who is the real victor in the whole saga. Here, we can't help but recall a brilliant scene when Praveen, after seeing a bunch of farmers fight over water, asks his host as to whether the police would arrive there. The host replies that the police will merely ask for witnesses; the villagers can instead talk and sort the matters between themselves.

There has been some criticisms over the film's portrayal of Dalit organisations. Yes, Maniyan is a Dalit, and so is Sunitha. But some of the detractors of the film claim that this is just to maintain the status quo of Nayattu's political stance.

While I am too naive to offer my expertise on caste politics, I can't deny there is some merit in the argument that Nayattu may bring the representation of Dalits in mainstream cinema, already quite sparse, a couple of steps back. However, like how the system makes the police force into their puppets, even the Dalit issue is used to represent a bigger foe at play - the vote-bank appeasement. The fear of losing votes is what drives a government to even care about them - remember how the CM agrees for an engineering college allotment in favour of diluting the controversy over the brawl at the police station?

And let's not forget the fact that the deceased man's friends have a genuine reason to believe Praveen, Maniyan and Sunitha are guilty. Praveen and Maniya were inebriated, they had a history with the victim, it was their jeep that collided with his bike and there was no proof of the nephew driving the car. It also doesn't help that they ran away from the station, giving off a perception of being guilty. And of course, there is also the karma factor...

In an earlier scene, Maniyan laments to Praveen that the situation of the police is worse than that of the goons. At least the goons have the choice to accept a contract; the police are forced to do the biddings of the political masters. But can that absolve his implicating of an attempted murder case on an innocent young man, whose only crime, if you want to call it that, is that he went to meet his girlfriend in the night, who happened to be the daughter of a VIP. In a way this is karma coming back to bite Maniyan, for God knows how many innocents he has implicated in similar false cases over the years.

Does Nayattu Take a Dig at the Present Government?

I have seen a few of my right winger friends praising lavishly on Nayattu. While Nayattu deserved to be praised, these very same friends were quite critical of other acclaimed films like Virus, Unda and The Great Indian Kitchen. While every person has their own opinion, it makes you think if they are supporting Nayattu for being critical of the ruling CPI(M) party in Kerala.

Even some of my LDF friends have drawn parallels of Jaffer Idukki's portrayal of the CM character to that of the present Kerala CM Pinarayi Vijayan, now serving his second term as the Chief Minister. Nayattu refuses to refer the political parties by the real names, so we can't accuse it of being against any political ideology. However, towards the end, when Sunitha and Praveen are being taken to court, the protestors outside raise slogans of 'Inquilab Zindabad!'

Now again, it may be my naivete speaking, but I do like to believe that Martin Prakkat may not be targeting any particular state power, but government apathy at large. Remember that Anil Nedumangad scene I mentioned a couple of paras back? If I am right about its reference, that was about Gujarat. And even though the present LDF government of Kerala looks to be the most organised of the lot in terms of governance, made easier by the low standards of comparison elsewhere, it isn't without its faults. But that's a political discussion for another arena. Or maybe you can be happy with this one... One Movie Review: Mammootty’s Political Thriller Loses an Important Discussion in Its Slo-Mo Idol Gazing.

Let me refer to one of the final frames - of that of a blind woman casting her vote. I may be wrong in my interpretation, but I feel that woman is us -the normal voter - casting our stones in the dark, hoping that it would break something and let the light in. Nayattu is streaming on Netflix.

(The above story first appeared on LatestLY on May 10, 2021 07:26 PM IST. For more news and updates on politics, world, sports, entertainment and lifestyle, log on to our website latestly.com).