One is a political thriller directed by Santosh Vishwanath and scripted ny Bobby-Sanjay. Mammootty plays the lead in the movie, that also stars Murali Gopy, Joju George, Siddique, Mathew Thomas, Ishaani Krishna, Gayatri Arun and Nimisha Sajayan. One has released in theatres on March 26, 2021. It is now streaming on Netflix India. 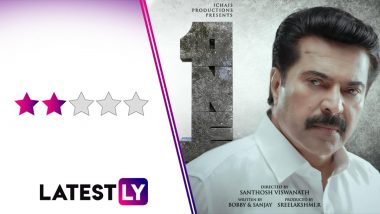 One Movie Review: It takes half an hour for Santosh Vishwanath's One to show us the first glimpse of Mammootty. Till then all we get was a huge cut out of the actor that brought in the title and a tremendous buildup for his entry scene. His name keeps being dropped by all and sundry, there is ambiguity over how he is as a person and a vast ensemble of artistes are introduced right before we get to see him. Yup, One's buildup for its protagonist feels similar to how Prithviraj Sukumaran's Lucifer treated Mohanlal's character. But still, this half an hour portion was the most captivating for me in the whole movie. One Movie Twitter Review: Mammootty’s Political Thriller Gets a Thumbs Down From the Moviegoers.

And then we finally meet Kadakkal Chandran (Mammootty), the Chief Minister of Kerala. We know the inspiration even if One is pretty coy about it. The movie might not even mention his political affiliation and also makes him much younger (and single) compared to the real-life figure. Still it is not so hard to guess who the movie wants to revere through the depiction of Mammootty's character.

With the state getting praise for its pragmatic handling of the ongoing COVID-19 crisis (though that has not stopped parties from carrying election rallies), I understand there would be shippers for One. But even for them, I wish One would have not lost its way in the charm of both the man it wants to venerate or the man who is playing the role.

One begins with a political turmoil over a Facebook post written anonymously by a teenager Sanal (Mathew Thomas) that criticises the Chief Minister. He wrote the post after being mistreated by the CM's security detail at a hospital, where Sanal's father (Salimkumar) was admitted. The post goes viral, it is said that the CM is furious while the opposition led by Marampalli Jayanandhan (Murali Gopy) smells an opportunity to malign the government. This goes for about half an hour.

And then Kadakkal Chadran makes his presence shown finally in gloriously built up establishing shots, with the trademark slo-mo tricks usually associated with a Mammootty film. He easily dissipates the situation, redeeming himself in front of the young boy, and thereby before the public.

From this problem to the next and the next - some from the opposition, some within his party - One keeps putting its larger-than-life protagonist but without any sort of depth or tension. Sure, there are some massy moments - a couple of them quite effective especially in the first half. But they aren't enough to save the languorous screenplay that keeps losing its focus.

Which is strange, since One is scripted by Sanjay-Bobby, two names that made me more interested in the film than its leading superstar. Sadly, One is easily one of their most empty screenplays even though there was huge promise in some of the elements they wanted to discuss. The Priest Movie Review: Mammootty’s Supernatural Investigative Thriller Loses Steam Much Before Its Big Reveal.

Primary among those was the much talked about Right to Recall act. A law that if imposed allows the citizen to 'recall' their elected representative if he or she doesn't fail to perform as per their expectations. You know, instead of waiting for another five years for the next elections to happen, and instead putting the public in control of their elected MLAs, MPs and ministers instead of the other way round.

Fantastic point to discuss in a movie, especially in these times when we are pissed with the kind of leadership we have at the moment. With Mammootty at the helm, One had a golden opportunity to amplify the need to have this law at least in the consciousness of the public. Instead, it takes nearly an hour for this subject to be even introduced in the film, before it is forgotten to show other opportunities to glorify the lead and then brought back and then forgotten again, only to finally make itself the focal point of the climax. Unfortunately, here also the discussion only serves as an opportunity for Mammootty to deliver one of his trademark monologues that serves nothing but shallow impact.

There is another plotpoint of Chandran having some sort of amnesia attacks that also is forgotten, after leaving a brief interval impact. Instead the movie keeps bringing Sanal and his family back in the narrative, so that Chandran gets his knight-in-shining-armour moments.

One is purely a Mammootty show, with the rest of its huge cast easily eclipsed in his shadow. Some actors like the talented Mathew Thomas or Joju George do get more scenes compared to the rest, Murali Gopy looked good as the purported antagonist, while others including veterans like Balachandran Menon and Madhu are restricted to limited screentime, But make no mistake, they all serve to show the hero in the more illuminating light with no supporting character getting any kind of growth. It is frustrating to see even Nimisha Sajayan of The Great Indian Kitchen fame wasted in a thankless role. The Great Indian Kitchen Movie Review: Nimisha Sajayan, Suraj Venjaramoodu’s Social Drama Is Brilliant!

- Weak and Doesn't Register Any Impact

One feels like it could have been a potentially powerful piece of cinema, that, in reality, is undone by the film being dazzled by the aura of its superstar. As a political thriller, it fumbles throughout its over-stretched runtime. As a conversation-starter for 'Right to Recall', it is simply a missed opportunity. Where One shines sporadically is as a mass entertainer, and let's say honestly, that is becoming somewhat tiresome now.

(One has released in theatres on March 26, 2021. It is now streaming on Netflix India, and this is review is based on having watching it on the platform. Stay Home, Stay Safe!)

(The above story first appeared on LatestLY on May 01, 2021 07:48 PM IST. For more news and updates on politics, world, sports, entertainment and lifestyle, log on to our website latestly.com).