Not Ileana D'Cruz but Kangana Ranaut Was the First Choice for Mahesh Babu's Pokiri?

If Kangana Ranaut's team is to believe, the actress had auditioned for Mahesh Babu's Pokiri and Mahesh Bhatt's Gangster simultaneously. While she ended up bagging the leads in both, she ultimately picked a B-town release over the Telugu one. 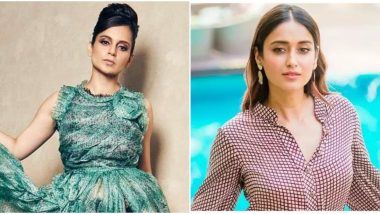 Remember Mahesh Babu's Pokiri? The 2006 release that enjoyed a great run at the box office. While we know its success had prompted the Bollywood makers to remake the movie in Bollywood (read Salman Khan's Wanted), what we didn't know was Kangana Ranaut's connection to it. While the original had Ileana D'Cruz romancing Mahesh Babu, seems like she wasn't the first choice of the makers. They had in fact, finalised Kangana Ranaut for it. This was obviously during Kangana's initial days in the entertainment industry. Half Yearly Roundup: From Kangana Ranaut in Panga to Tripti Dimri in Bulbbul, 10 Best Performances by a Bollywood Actress in First Half of 2020.

Kangana Ranaut's team on Twitter recently revealed how the actress had simultaneously auditioned for Gangster and Pokiri and ended up bagging the lead roles in both the film. But guess, she ultimately picked Bollywood over regional cinema then. "Kangana had also auditioned for Pokiri, alongside Gangster & got selected for that as well. Pokiri went on to become an all time blockbuster, so your thinking that because of Gangster she is who she is, is totally not working. Water finds it’s level," wrote the Manikarnika actress' team while replying to Pooja Bedi's tweet. Kangana Ranaut Was Offered the Iconic 'Ram Leela' Song that Featured Priyanka Chopra.

For your info @PoojaB1972 Kangana had also auditioned for Pokiri, alongside Gangster & got selected for that as well. Pokiri went on to become an all time blockbuster, so your thinking that because of Gangster she is who she is, is totally not working. Water finds it’s level🙏

The revelation was made after Pooja Bhatt had claimed that Kangana was always a talented actress else she wouldn't have been launched under the banner of Vishesh Films. It meant that she had another big and successful offer and Gangster shouldn't be solely credited for helping her make a name in the industry. Of course, Kangana has come a long way since then. Today she's gearing up for Thalaivi,  the biopic of popular Tamil actress turned politician, Jayalalithaa.

(The above story first appeared on LatestLY on Jul 09, 2020 06:33 PM IST. For more news and updates on politics, world, sports, entertainment and lifestyle, log on to our website latestly.com).