Paresh Rawal To Make His Kollywood Debut With Soorarai Pottru! Veteran Actor Shares His Experience Of Working With Suriya

In an interview with a leading tabloid, Paresh Rawal has shared his experience of working with Suriya and also spoken about the working style of south film industry. 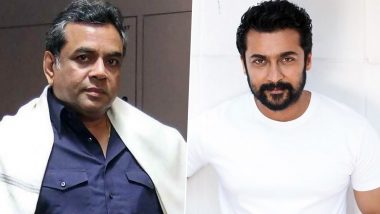 Soorarai Pottru is the upcoming Tamil film that is directed by Sudha Kongara. Starring Suriya in the lead as Nedumaaran Rajangam, this film also stars veteran Bollywood actor Paresh Rawal as the antagonist. We did get to catch a glimpse of his character when the makers had released the film’s trailer and it was mighty impressive. In an interview with a leading tabloid, Rawal has shared his experience of working with Suriya and also spoken about the working style of south film industry. Soorarai Pottru Trailer: Suriya Starrer Is An Inspiring, Intense Tale And A Perfect Treat For Diwali 2020! (Watch Video).

In an interview with Mid-Day, Paresh Rawal was quoted as saying, “It is such a joy to work with Suriya. He is such a huge star with (a massive following) across the nation, but he never behaves like one. Most stars here are so disciplined and focused; they don’t throw a tantrum on set or throw their weight around. In the ’90s, people appreciated the working style of the South industry. Here, your shoot gets over on time, you get your payment on time, and so on. If the director has called for a 9am shift, the entire team will be present, regardless of how big a star one is.” Suriya’s Photos From Soorarai Pottru Director Sudha Kongara’s Daughter’s Wedding Go Viral! Fans Impressed With His New Look.

Paresh Rawal also shares how the team of Soorarai Pottru helped him with the dialogues. He further stated, “The people are simple, but their language is difficult for me. The team was patient with me as I learnt all the lines by heart. They constantly helped me with the dialogues.” Soorarai Pottru, bankrolled under the banner of 2D Entertainment and Sikhya Entertainment, is all set to be released on Amazon Prime Video on November 12, 2020.

(The above story first appeared on LatestLY on Nov 08, 2020 08:37 AM IST. For more news and updates on politics, world, sports, entertainment and lifestyle, log on to our website latestly.com).