Rajinikanth Admitted To The Hospital Due To Fluctuating Blood Press, No COVID-19 Symptoms

Rajinikanth has been admitted to the hospital but it's not because of COVID-19 as was suspected before since a few crew members of his film Annaathe tested positive recently. Read the story to know why he was hospitalised. 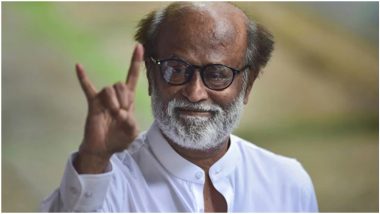 The shoot of Rajinikanth's movie came to an abrupt halt when a few members of the crew tested positive. Now we have news that Rajinikanth too has been admitted to the hospital but it's not because of COVID-19. As per a statement released by his hospital, the superstar showed fluctuating blood pressure and exhaustion. That led to his hospitalisation. The statement from the hospital also states that he will be investigated and monitored closely. Annaatthe: Superstar Rajinikanth’s Film Is All Set for Pongal Release

On December 22, Rajinikanth tested negative for COVID-19 and doesn't have symptoms of the infection either. The severe fluctuations of his blood pressure have prompted the doctor to evaluate him further. He is also hemodynamically stable.

Rajinikanth was shooting Annaathe when a few members tested positive. That brought the filming to a grinding halt. Apparently, the superstar wanted to wrap up the shoot by mid-January next year but now that seems difficult. he is supposed to launch his newly floated political party on New Year's Eve. We wish him a speedy recovery so that all his plans become a reality.

(The above story first appeared on LatestLY on Dec 25, 2020 01:50 PM IST. For more news and updates on politics, world, sports, entertainment and lifestyle, log on to our website latestly.com).