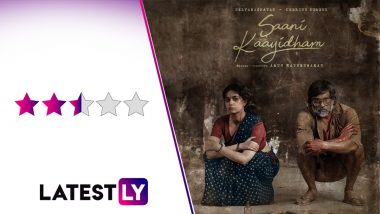 Saani Kaayidham Movie Review: Arun Matheswaran, who made the impressive Rocky last year, returns to direct Keerthy Suresh and Selvaraghavan this time in another brutal saga. His new directorial, Saani Kaayidham, continues to be as gory and violent as his debut film, there are black and white frames interspersed amidst some impressive wide angles and the cinematography (this time by Yamini Yagnamurthy) is fabulous. With some solid performances and disturbing visuals, Arun serves a revenge saga that isn't for the faint-hearted. Saani Kaayidham: Selvaraghavan and Keerthy Suresh’s Film To Opt for a Direct OTT Release on Amazon Prime Video.

Set in the '80s, Saani Kaayidham is broken up into chapters, with the prologue showing Ponni (Keerthy Suresh) torturing a woman in a ruined structure, with Sangayya (Selvaraghavan) in the next room waiting for her to get the job done. By the end of the scene, Ponni takes some information from the grievously injured woman before burning her alive. Why these two killed this woman, and who are their next targets are covered in the next six chapters.

Not sure if it is deliberate but the inspiration behind Saani Kaayidham feels to be the 1978 shock-fest I Spit On Your Grave. While that controversial film was known for its brutal rape and revenge drama, Arun Matheswaran borrows that thread from the movie, and interperses the caste politics within it.

So while I Spit On Your Grave's heroine was the unfortunate victim of the rapists' pure perversion, Ponni, a police constable, here become the target of four upper-caste rascals of her village, because her lower-caste husband spit upon one of them. After all, it is the woman who bears the brunt of any man's ire, no matter the caste or creed, or if she has anything to do with the men's ego hassles. During the torture of one of the villains later in the film, the radio is heard playing Mahabharata, which is just an mythological reminder of how a woman is dragged into a game of dice between men, while she has nothing to do with and yet suffers the most humiliation. Ponni, however, has no Lord Krishna to protect her from her assaulters.

Unlike the protagonist of the American film who operated her gory vendetta saga all alone, Ponni get help in her revenge in her estranged half-brother Sangayya, who has his own tragic backstory to say, and was also a victim that night. OTT Releases of the Week: Anil Kapoor’s Thar on Netflix, Anson Mount’s Star Trek Strange New Worlds on Voot Select, Keerthy Suresh’s Saani Kaayidham on Amazon Prime Video and More.

So while Ponni mauls and butchers her way to quench her taste for bloody revenge, we also get to see the relationship between half-siblings develop in the most fractured of the situations. It is moments like this that gives the violent drama a humaneness, though I wanted Saani Kaayidham to expand more on this bonding beyond the common craving for vengeance. It would have helped in strengthening the emotional connect I as a viewer have with the protagonists, despite the fact I understand their thirst for bloody vengeance.

Though it helps when both the lead actor are in top form. Especially Keerthy Suresh. The camera just loves to capture the anguished and murderous emotions on her face, particularly standout being the scene where Ponni delivers a long tormented monologue, shot in a single take, on why she wants her revenge. It is easily one of Keerthy Suresh's best performed scenes if not the best. In fact, Ponni stands out as her most visceral act in her career, and the actress stuns you with her versatility.

Dear Dhanush, you have competition as an actor within your family. Your brother, who needs no introduction as an accomplished director, is slowly turning into a performer worth looking out for. Selvaraghavan, who was quite likeable in Beast, shows even more improvement here, and the scene where Sangayya narrates his flashback show his mettle even in emotional scenes. He is also fabulous in the scenes where he has to get into beast-mode. Even the actors who take on the supporting roles and the villains are perfectly cast.

Censoring and muting of words apart, Arun Matheswaran doesn't hold back on the brutalities and gore. The first couple of chapters are very much disturbing over the portrayal of upper caste boorish behaviours leading to the nauseating gang-rape and assault on the protagonist. Even though the director doesn't detail on the act, the sequence is stomach-churning made even more frightening by the fact that the victim is also a policewoman.

Once Ponni and Sangayya get on the revenge spree, the violence becomes even more bloody and gruesome, aided with help of some sickening sound effects and even more disturbing expressions on Keerthy Suresh's face. My favourite chapter is the 'Matador Murders'. There is a tense element in the segment with a touch of black humour, that I didn't experience in the other violent chapters of the movie.  However, after a point, I was numbed by the violence, as it became repetitive. I wish that the movie took a breather in between and allow Ponni to reflect on her murderous rage. That doesn't happen, though.

There is also the fact that Saani Kaayidham runs along a very predictable narrative. There are no surprises, no stunning revelations, and you know who is going to die and who won't. Fans of Rocky might revel in the overdone display of violence, but not everyone has the stomach to digest the same.

Saani Kaayidham is to be watched for the powerhouse performances of both Keerthy Suresh and Selvaraghavan. That you may find it difficult to relish their performances through the movie's relentless display of violence and brutalities is not going to be everyone's cup of tea. Saani Kaayidham is streaming on Amazon Prime Video.

(The above story first appeared on LatestLY on May 06, 2022 10:34 AM IST. For more news and updates on politics, world, sports, entertainment and lifestyle, log on to our website latestly.com).