Malayalam film actress Samyuktha Varma made her debut in 1999 with the film Veendum Chila Veettukaryangal. She has acted in almost 18 films. 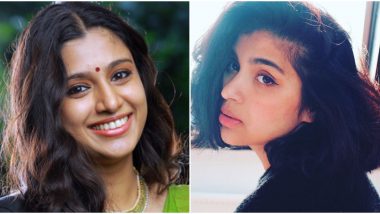 March 8 is celebrated as International Women’s Day, and across social media platforms there were messages showered for every girl and woman. But besides such amazing wishes, there was one post that caught netizens’ attention, especially of Mollywood lovers. Samyuktha Varma, one of the most popular actresses of Malayalam cinema, shared a post on Instagram that left everyone’s jaw-dropping. She shared a picture of her sister Sangamithra Varma, and it was her uncanny resemblance with the former Malayalam actress that left everyone amazed. Malayalam Actress Samvritha Akhil Blessed With A Baby Boy, Names Her Second Child Rudra!

Samyuktha Varma shared the post not only because it was Women’s Day, but also to wish her sister who also celebrated her birthday on the same day. Her post read, “Feminine energy is powerful& mysterious.it attracts things to it without the use of force use ur powers for good happy birthday malu!! Sangamithra varma#sister”. Sangamithra's look - bob haircut style, winged eyeliner and a nude lipstick, did leave everyone impressed. And the next thing that has left all Mollywood lovers wondering, is Sangamithra all set to make her debut in cinema? This Is What Amitabh Bachchan Has to Say about Malayalam Superstar Mohanlal after Watching Marakkar: Arabikadalinte Simham Trailer.

Samyuktha Varma made her debut in 1999 with the film Veendum Chila Veettukaryangal. She has acted in almost 18 films. Her last movie was a Tamil flick, Thenkasi Pattanam, which was a remake of the Malayalam blockbuster Thenkasipattanam. After that, she has not signed any films. Her husband, Biju Menon, has had some impressive releases. Ayyappanum Koshiyum, the recently released movie, opened to positive reviews. Now let’s wait and watch if Sangamithra Varma is going to make her debut in Malayalam cinema or not.

(The above story first appeared on LatestLY on Mar 09, 2020 04:41 PM IST. For more news and updates on politics, world, sports, entertainment and lifestyle, log on to our website latestly.com).