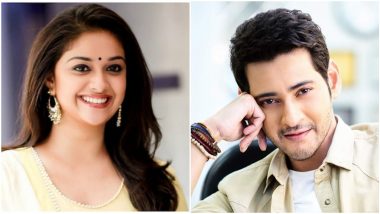 While Keerthy Suresh had earlier announced her decision to come on board for Mahesh Babu's next release, Sarkaru Vaari Paata, the actor has recently confirmed the same on her birthday. Mahesh took to his Twitter account to officially announce Keerthy as the leading lady of his next project and extended a warm welcome to her on behalf of his entire team. The project is yet to go on floors but we are excited to see Keerthy and Mahesh come together for a project. Keerthy Suresh Birthday Special: She Loves Ethnic Ensembles and There's No One Who Nails Them As Well As Her (View Pics).

"Here’s wishing the super talented @KeerthyOfficial a very happy birthday!! Team #SarkaruVaariPaata welcomes you aboard!! Will make sure it’s one of your most memorable films. Have a great one," tweeted Mahesh Babu while extending his birthday wishes to the National Award-winning actress. Keerthy was also slated to mark her Bollywood debut with Ajay Devgn's Maidaan but decided to exit the project. Sarkaru Vaari Paata: Not Mahesh Babu But Allu Arjun was the First Choice for Parasuram's Next Directorial?

Here’s wishing the super talented @KeerthyOfficial a very happy birthday!! Team #SarkaruVaariPaata welcomes you aboard!! Will make sure it’s one of your most memorable films💥💥💥 Have a great one !! 😊😊😊 pic.twitter.com/MPzEWc0uGE

Besides Sarkaru Vaari Paata, she also has Miss India, Good Luck Sakhi and Saani Kaayidham in her kitty. And she's also collaborating with Rajinikanth for Annaatthe and with Nithiin for Rang De. We wish Keerthy a very exciting and eventful year ahead. Happy Birthday!

(The above story first appeared on LatestLY on Oct 17, 2020 11:20 AM IST. For more news and updates on politics, world, sports, entertainment and lifestyle, log on to our website latestly.com).