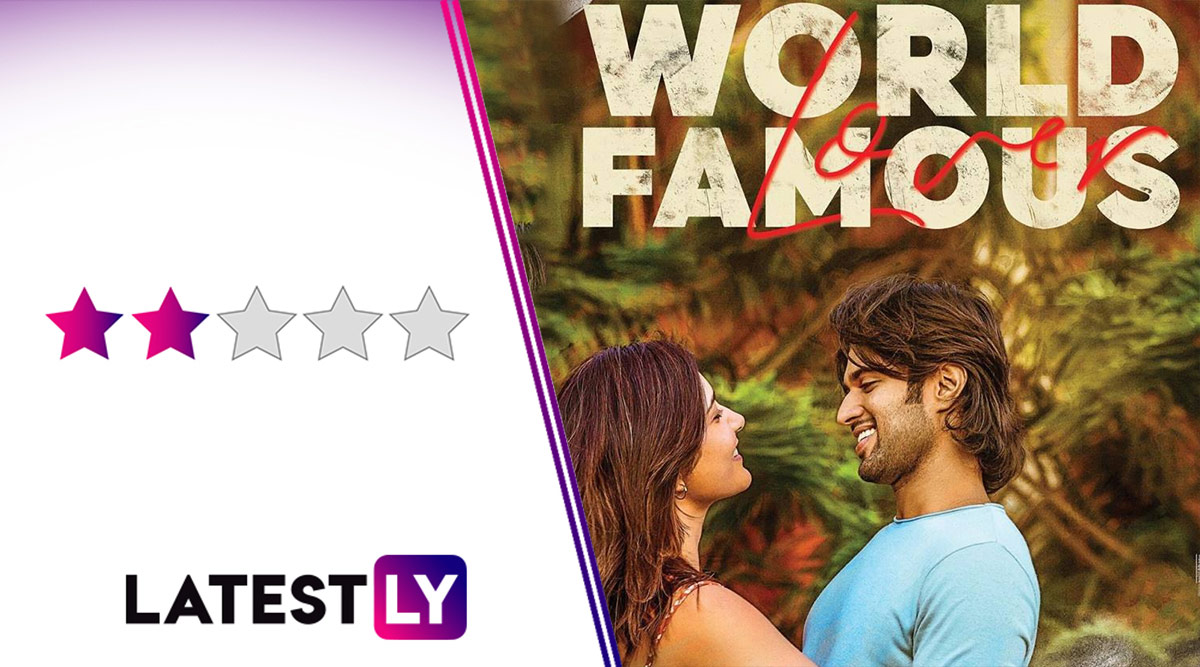 World Famous Love Movie Review: In a couple of interviews, I have been hearing Vijay Deverakonda say that now it is time to bid goodbye to Arjun Reddy and any questions relating to the film, since it is two years now. Perhaps, the dynamic young Telugu star hasn't given the same memo to his filmmakers, who insist on putting a vibe of his character in that Sandeep Vanga movie in most of his recent films. Sadly, that's the also case with his latest release, World Famous Lover, directed by Kranthi Madhav. I am not sure at which point the audience will take a cue from Sara Ali Khan in Love Aaj Kal, and tell these filmmakers 'Tum mujhe tang karne lage ho?'. World Famous Lover Trailer: Love, Madness, Heartaches…Vijay Deverakonda’s Romantic Drama Is Full of Emotions and a Perfect Watch for Valentine’s Day 2020 (Watch Video).

The incessant relying on the Arjun Reddy tropes hurts even more, because as an actor, Vijay Deverakonda has a lot more to offer than being the fully bearded wild young man with self-destructive tendencies and an ego to fill ten elephants in. And that is also in display in World Famous Lover (frankly, I really didn't get the title, apart from the fact that it is the name of the book that the protagonist finished by the end).

In World Famous Lover, Vijay is seen in three roles, each different from the other, and yet has a lot in common. The main segment has him as Gautham, a stay-at-home author in a live-in relationship with his girlfriend Yamini (Raashi Khanna). Yamini, with her job, is supporting both of them financially so that Gautham can write his book. But the man-child in him is rather invested in watching cartoons, making dispassionate lovemaking with her and really not caring how her day goes. Needless to say, she snaps out of it one day, and breaks up with him for good.

Not understanding what he did wrong, Gautham first begins to harangue Yamini to figure out why she is disappointed with him. And then he challenges him to begin writing. His first story is about Seenu, a union leader in a quarry, who is married to Suvarna (Aishwarya Rajesh) with a kid, but has lost interest in being intimate with his wife and often tells her off. Temptation arrives in the form of a city girl Smitha (Catherine Tresa), who joins his quarry as a welfare officer and takes a liking for Seenu.

The second story is about Gautham, a youngster who resides in Paris and who loves to indulge in daredevil sports. He meets and falls for a French air hostess Iza (Izabelle Leite), and soon they get engaged. But Iza wants to take things slow when it comes to intimacy, leading to Gautham doing something rash that results in disastrous consequences.

In between, we also get to see how Gautham and Yamini met and fell in love, and the real circumstances behind him being a stay-at-home writer.

As a movie, World Famous Lover did have an interesting plot element that attempts to make it different. Gautham using his own frustrations, sacrifices and anger in his stories comes across as an idea that has potentially terrific ramifications. It gives Vijay an opportunity to distance himself from the role he did in the Sandeep Vanga film. Especially his character in the first story, where the actor sparkles as the brash union leader with a Telangana slang. Giving him some tough competition is Aishwarya Rajesh as the patient wife who is yearning for his attention. Their performances make this segment perhaps the best of the lot, even if it has nothing more to offer.

The second story written by Gautham is about young love and sacrifices, which is merely ok and has a ridiculous twist that is played in a very sombre manner. If these are the kinds of stories that Gautham wants to churn out, then he is a pretty lousy and unoriginal writer and should have returned to his 9-5  job asap! Or maybe Gautham represents the lackadaisical writing in Telugu cinema when it comes to mainstream fare, which also explains the lazy writing involved in a wrap-around story. World Famous Lover New Poster: Vijay Deverakonda's 'No Abs, No Worry' Look is Unusually Hot (View Pic).

There is absolutely nothing new to offer in Gautham and Yamini's story. In the second half, this track treads so dangerously into the Arjun Reddy territory that you can't even ignore the similarities. And I am not even talking about the violent, self-destructive cesspool that Gautham spirals himself into. We have Yamini's father who disproves Gautham as his son-in-law. We also get to see Yamini trying to marry someone else to distance herself from her ex. And what's more, the movie even ends itself on a park bench, just like Arjun Reddy did.

Another big problem is Raashi Khanna's performance. The actress is mostly stuck with two expressions - an angry fluster or a whiny face. It hampers her character and leaves us disconnected with her character's actually genuine problems.

Also, what's the obsession with the filmmakers of these superstar movies to let the runtime go way beyond the prescribed patience limit?

Kranti Madhav's treatment of the film is decent, and with the help of Vijay's likeable screen-presence, makes even the thuggish of scenes watchable. But that doesn't compensate for the fact that the writer in him has nothing new to say in a movie that has three different stories!

- A Somewhat Interesting First Half

World Famous Lover has three different love stories, and not one manages to make you go wow! Moreover, the movie gives little scope to its fantastic leading young man to break out of the mould he is getting seriously typecast into.