The ace comedian has left no stone unturned when it comes to entertaining the audience. But one look at this outfit is enough to tickle your funny bone. Has Grover borrowed his wardrobe from a certain Singh, we wonder! 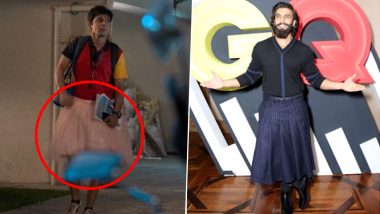 We rubbed our eyes with utter disbelief when we laid our trained eyes on this visual! Is that Sunil Grover wearing a skirt? No, hang on a sec!! Is That Sunil Grover wearing a baby pink shimmery short skirt? Yes, the ace comedian chose to don that itsy bitsy outfit over a tee for sensational effect. This mix can give even a certain Ranveer Singh a jolt of sorts. Deepika Padukone's hubby has been raising our eyebrows with his wacky wardrobe. But Mr Grover's Sartorial choice is something else, we must add! What's the deal boss?

The ace comedian has left no stone unturned when it comes to entertaining the audience with the portrayal of different characters which have secured a permanent place in the hearts of the audience. Now, the actor will be seen in his debut as a lead (on OTT) in ZEE5’s Sunflower which is set to premiere on 11th June 2021. Sunflower Trailer: Sunil Grover, Ranvir Shorey's Comedy-Thriller Promises Quirky Actions; Streaming on ZEE5 From June 11 (Watch Video)

The actor who won hearts by portraying different comic characters is now experimenting with his role in Sunflower. Well, not just the character, but also the outfits!  The trailer features Sunil in a pink tutu skirt, t-shirt and sneakers. Looks like Grover grabbed some styling tips from Ranveer Singh. Sunil’s character in Sunflower is very intriguing. Deepika Padukone Is Ready to Whack Ranveer Singh for This Reason

Sunflower is a crime thriller comedy that revolves around a murder mystery based in a middle-class housing society in Mumbai called ‘Sunflower’. The series is written by Vikas Bahl and co-directed by Rahul Sengupta and Vikas Bahl. It also features Ranvir Shorey, Mukul Chadda, Girish Kulkarni, Ashish Vidyarthi, Shonali Nagrani in key roles.

(The above story first appeared on LatestLY on Jun 08, 2021 04:15 PM IST. For more news and updates on politics, world, sports, entertainment and lifestyle, log on to our website latestly.com).