S S Rajamouli's RRR is finally arriving in the theatres near you this week as the Jr NTR, Ram Charan, Ajay Devgn and Alia Bhatt starter is all set to release on March 25. 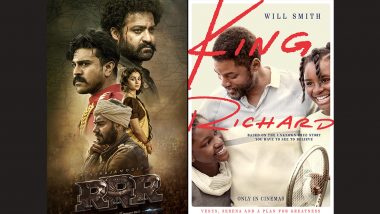 S S Rajamouli's RRR is finally arriving in the theatres near you this week as the Jr NTR, Ram Charan, Ajay Devgn and Alia Bhatt starter is all set to release on March 25. After several delays, the grand scale Telugu movie is finally hitting the big screens and it has The Kashmir Files as one big competition at the Box Office.  Will Smith's Oscar-Nominated film King Richard is based on the incredible true story of Richard Williams who is the inspiration and coach of his two daughters Serena and Venus Williams who went on to become Tennis champions. The film is hitting theatres on March 25. Beast From April 13! Thalapathy Vijay And Pooja Hegde Film’s Theatrical Release Date Announced.

Telugu star Ravi Teja's upcoming film Ramarao On Duty is also heading to cinema halls this week on March 25. Ramarao On Duty is mass hero's yet another action entertainer in which Ravi Teja will be seen essaying the role of a government officer. Divyansha Koushik and Rajisha Vijayan are the film's female leads. Ahmad Kabir Shadan plays the titular role in Hero Of Nation Chandra Shekhar Azad which also stars Zarina Wahab and Raza Murad in pivotal roles. Below is the list of the film arriving in theatres on March 25. OTT Releases of the Week: Simone Ashley’s Bridgerton 2 on Netflix, Pablo Schreiber’s Halo on Voot Select, Olivia Rodrigo’s Driving Home 2 U on Disney+ Hotstar and More.

Here is the complete list of the movies releasing on the theatres this week: (the below releases are subject to change as per the makers' decision)

Theatrical Release Of The Week - March 25

(The above story first appeared on LatestLY on Mar 22, 2022 05:57 PM IST. For more news and updates on politics, world, sports, entertainment and lifestyle, log on to our website latestly.com).