We search for exciting content on the OTT platforms every week, so that audience can relax and binge-watch what they prefer and like. This week we have very few releases on OTT, let's quickly take a complete look at the series and movies releasing on the OTT platforms this week. 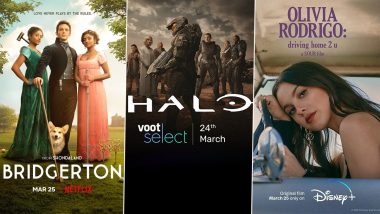 We are moving on to the next week of March 2022 and with that we have a list of very few releases. The list mainly have exciting series and one documentary/movie for release. However, the interesting series and movies will drop on the OTT platforms like Disney+ Hotstar, Netflix and Voot Select. Talking about the biggest release of the week it would be Bridgerton Season 2, which will release on Netflix on March 25. The period-drama series looks promising and royalistic just like the previous season. Bridgerton 2 stars Jonathan Bailey, Charithra Chandran, Simone Ashley, Adjoa Andoh, Lorraine Ashbourne, Harriet Cains, Bessie Carter, Shelley Conn and Ruth Gemmell, among others. Bridgerton Season 2 Trailer: Netflix’s Period Drama Series Highlights the Love Triangle Between Jonathan Bailey, Charithra Chandran and Simone Ashley (Watch Video).

Another big release of the week would be Halo, which is all set to premiere on Voot Select on March 24. The military sci-fi TV series is based on the video game franchise of the same name. Halo stars Pablo Schreiber, Jen Taylo, Natascha McElhone, Yerin Ha, Charlie Murphy, Shabana Azmi, Bokeem Woodbine, Kate Kennedy, Natasha Culzac and Bentley Calu. Another interesting release of the week would be Olivia Rodrigo's documentary Driving Home 2 U, which will stream on Disney+ Hotstar from March 25. Halo - The Series Trailer: Master Chief’s Full Suit and Glimpse of Cortana Are the Highlights in This Live-Action Videogame Adaptation (Watch Video).

(The above story first appeared on LatestLY on Mar 20, 2022 05:50 PM IST. For more news and updates on politics, world, sports, entertainment and lifestyle, log on to our website latestly.com).