A Suitable Boy Review: Tabu and Ishaan Khatter’s Mini-Series Is Not a ‘Suitable’ Adaptation for the Book Fans! 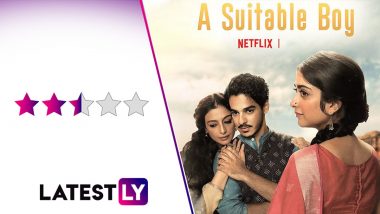 A Suitable Boy Review: Vikram Seth's best-selling work A Suitable Boy is one of the longest novels in English language, with more than 1400 pages. To contain such a long book within merely six episodes is definitely a challenging task, even in the hands of someone acclaimed as Mira Nair (Monsoon Wedding). She, however, has some of her task made easy thanks to an excellent cast assembled, with each actor performing to their best, be it the veteran Tabu or Ram Kapoor, or the young, exuberant Ishaan Khatter or the naturally talented Tanya Maniktala. OTT Releases Of The Week: Ali Fazal’s Mirzapur Season 2, Sacha Baron Cohen’s Borat Sequel on Amazon Prime, Tabu & Ishan Khatter’s A Suitable Boy on Netflix and More.

For the novices, A Suitable Boy is about Lata Mehra (Tanya Maniktala), a bright, young girl, whose single status is a concern for her mother Rupa Mehra (Mahira Kakkar, terrific). While the mother looks for a suitable boy for her, Lata finds herself in three conflicting romances, one of which is with a Muslim boy Kabir Durrani (Danesh Razvi).

Parallel to this track is that of Maan Kapoor (Ishaan Khatter), the carefree son of the State Minister Mahesh Kapoor (Ram Kapoor), the latter also the father-in-law of Lata's elder sister Savita (Rasika Dugal). Maan finds himself getting besotted with a courtesan, Saeeda Bai, who reciprocates his feelings, but is unsure of where their relationship is headed. And considering all the event are taking around the time India is trying to fit itself in the free era, where the educated are trying to figure their allegiances and the communal tensions are at its peak.

Watch the Trailer of A Suitable Boy:

If you are bookworm and haven't read A Suitable Boy, you are missing out on a brilliant commentary on India's societal divides and cultural phenomena during the partition era. Adapting the novel into merely a handful of episodes is not an advisable task, and that shows in this mini-series. While Mira Nair catches the essence of the book right, it feels very rushed, and many of the characters and subplots don't get time to be developed. Moreover, many of the subtexts don't get translated or is avoided, making A Suitable Boy feel shallow at times.

They are some good moments in between, mostly courtesy Saeeda and Maan's track, which is the most developed storyline in the series. Perhaps, it helps in having two big stars in this plotline to get more attention. Also, Tabu can make any role and any writing mesmerising merely with her presence. Ishaan Khatter continues to show enough promise, taking on roles and projects that aren't exactly mainstream. Despite the age difference, their chemistry is fantastic and is one of the few reasons why you should check out A Suitable Boy.

Tanya Maniktala also feels like a fine casting, bringing Lata out of the book with ease, and is quite convincing about portraying the moral dilemmas of her character, in following her heart or stopping herself from doing so.

The same cannot be said about most of the rest of the cast, filled with some amazing talent. We have incredible actors like Rasika Dugal, Ram Kapoor, Manoj Pahwa, Vijay Raaz, Vinay Pathak, Namit Das, Shahana Goswami, Randeep Hooda, Ranvir Shorey, Vijay Verma, Kulbhushan Kharbanda, Aamir Bashir among others. Only a couple like Shahana Goswami as Latha's saucy sister-in-law, Ram Kapoor as the vain Mahesh Kapoor and Pahwa as a crude royal leave some sort of impact. Some of the actors are completely wasted. Since Mira Nair had adapted the book for a Western audience -which is why, the prim English is being spoken by most characters, even if it sounds odd - the under-use of these actors may not be felt by them. But the Indian viewers might find it incredulous if someone as fine an actor as Randeep Hooda is only used for a couple of scenes. Mira Nair Birthday Special: Five Best Movies Of The Filmmaker And Where To Watch Them.

- Waste of Some Good Actors

A Suitable Boy, despite its contemporary connotations and some lovely moments, comes across as a weak adaptation, especially is you expected something on par with The Namesake from Mira Nair. Should have been extended into a proper series, instead of a six-episode arc. Or better, just read the book and don't allow its size to intimidate you. A Suitable Boy is streaming in India on Netflix.

(The above story first appeared on LatestLY on Oct 23, 2020 09:49 PM IST. For more news and updates on politics, world, sports, entertainment and lifestyle, log on to our website latestly.com).