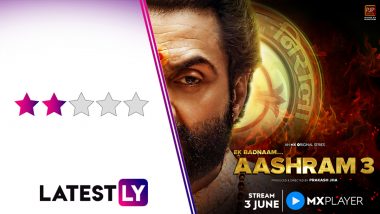 Aashram season 3 review: Prakash Jha is back with his controversial series on a fraud godman Babaji, in Aashram's third outing. Bobby Deol returns with his debauchery. We aren't alien to such a narrative of a 'dhongi baba', Singham 2 being a prime example. Jha's story-telling in last two seasons, however, managed to keep you engaged despite being a cliched topic. But it seems the makers have finally run out of edgy twists and shocking character evolution. Aashram Chapter 2 Review: The Exploits of Bobby Deol’s Baba Nirala Still Engage, but the Series Fails to Live Up to Its True Potential.

Aashram season 3 begins with the win of Hukum Singh (Sachin Shroff) in the state elections. While he is the CM, the reins of the government rests with Babaji (Bobby Deol). Pammi (Aaditi Pohankar) with Akki ((Rajeev Siddhartha) is on a run after escaping from the Aashram. Babaji and his right hand man Bhopa (Chandan Roy Sanyal) deploy their own cavalry of henchmen and the state's police force to hunt her down. Babita (Tridha Choudhury) is trying to rot Babaji's empire from the inside by distributing ministries. Rest is how Babaji continues to expand his clout and power with little to no resistance.

If we have to talk about the best parts in the series, Jha's team of writers has managed keep the confluence of politics with fake spirituality intact. At times, it baffles you to know blind faith is propagated and glorified. There's a family who leaves their teenage daughter with Babaji thinking he will cure her 'pagalpan'. It's astounding how they let her go to him despite having reservations because of their devotion for him. This desperate need to humanise God is deeply disturbing and that emotion is nicely presented in the series. It has many promising storylines running parallel to Babaji.

But where the season falters terribly is it seems as if the makers have completely forgotten what happened in the second season. The biggest disappointment is how the cracks between Babaji and his partner-in-crime Bhopa that were evident in the previous season, have not even been explored here. They seem pally again as if nothing has happened. Even the uprising of women folk within the walls of the aashram is very half-heartedly explored. Anupriya Goenka's character has been relegated to cameo appearances.

Also, Babaji's tyranny is annoyingly one-sided with the entire system under his thumb. There is no relief for anyone. He continues his crimes unabashedly with no one to pull him up for it. The repeated dousing of rebellion kills the excitement in the show. If that's not enough, character development is almost nil. Pammi is supposed to be the flagbearer of this rebellion against Baba but all she does is run away, make a shoddy attempt to kill him, starts living a domestic life, moves around without a disguise despite her face being plastered around Kashipur, and then suddenly realising her purpose of exacting revenge. It's highly disappointing to see one of the strongest characters being treated so shabbily. Aashram 3: Bobby Deol Looks Forward to Return in the Third Season of Prakash Jha’s Web Show.

Performances are quite weak. Bobby Deol looks best when he just broods and nods. Not being an expressive actor helps him in it. Chandan Roy Sanyal continues to get an under-developed character arc, Aaditi Pohankar's role deserved much better writing, Sachin Shroff has done a good job and Esha Gupta is usual. None of the characters stay with you.

-neatly crafted stories of people's blind faith in such fraudsters

Aashram season 3 could have been avoided as the story doesn't really head in any direction despite its lofty intentions and Bobby Deol's malicious act. Aashram season 3 streams on MX Player.

(The above story first appeared on LatestLY on Jun 03, 2022 08:46 AM IST. For more news and updates on politics, world, sports, entertainment and lifestyle, log on to our website latestly.com).