Ananya Panday’s Revelation About Her Mum Abusing on Fabulous Lives Of Bollywood Wives Has Been Lifted From Khloe Kardashian and Twitter Is Having a ‘Le Bal’ With It!

Netizens who have been watching Netflix's Fabulous Lives of Bollywood Wives have made a revelation by showing how Ananya Panday's F*ck line has been copied from Khloe Kardashian. Check it out. 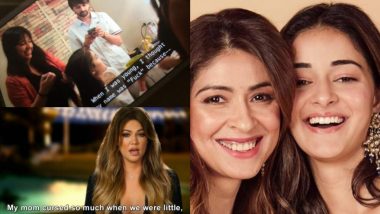 Netflix's latest headline-grabbing docu-drama Fabulous Lives Of Bollywood Wives has been a hot topic of discussion everywhere. Right from Maheep Kapoor's Le Bal blabbering, Seema Khan's bubbliness, Bhavana Panday's diplomatic way to deal with things to Neelam Kothari's Bollywood debut, the show's content has been getting mixed reviews. However, we never knew that the makers might plagiarise the show in order to make it look cool and glam. Well, as the audience ain't dumb and they've realised how Ananya Panday's dialogue has been picked from Khloe Kardashian. Fabulous Lives Of Bollywood Wives Twitter Review: Neelam Kothari, Maheep Kapoor, Seema Khan and Bhavana Pandey's Netflix Show Gets Heavily Trolled For Its Head-Spinning Content!

In the first episode of the show, when Ananya uses the word f**k, her mom stops her, right there. To which Ananya replies, 'You can't be underage to abuse." Speaking while in the dressing room, she further adds, “I have grown up around you and papa abusing. When I was young, I thought my name was F*ck* because you all used to say it." However, in Keeping Up With the Kardashians (KUKTK), Khloe Kardashian utters the ditto sentiments and says, “My mom cursed so much when were little, I thought my name was F*ck." Fabulous Lives of Bollywood Wives Review: Bhavna Panday and The Men Try To Redeem This Inane Excuse Of A Show (LatestLY Exclusive).

Check Out The Proof Below:

Ananya's dialogue was a sasta version of khloe's dialogue from keeping with the Kardashians.

the tweets are enough to tell,that bollywood will forever remain a piece of shit.

I saw someone post about the scene where Ananya Pandey verbatim repeats the Khloe Kardashian dialogue. Deddd.

Well, we never expected this, but here we are, playing the same old trick, a little tweak and almost copied from the original. Ananya Panday has made several appearances on the show. FLOBW is all about four BFF Bollywood wives and peek into their luxurious and mundane life. Stay tuned!

(The above story first appeared on LatestLY on Dec 04, 2020 05:36 PM IST. For more news and updates on politics, world, sports, entertainment and lifestyle, log on to our website latestly.com).